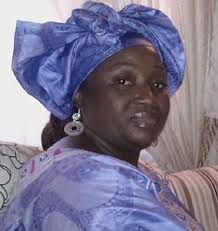 The team in a convoy arrived in Bumpeh, Nimiyama Chiefdom, Kono in a grand style as residents  in jubilant mood flooded the streets to warmly welcome the them as they chanted songs of praise for the the Minister of Local Government and Rural Development, Hon Dianna Konomani, whom they referred to as their leader and redeemer.

Among the dignitaries that welcomed the team were the Parliamentary leader  and Representative for Kono, P.C Ahmed Sheku Tejan Fasuluku, The Paramount Chief and Speakers, Tribal heads, school pupils, students, traditional heads, Motor bike riders, members of attire bases, the Youths, elders of the Chiefdom and the members of Parliament representing  Kono District, among others.

The people of Bumpeh Town insisted that Madam Konomani should disembark from her vehicle and join them march through the township. The leader and Redeemer complied to their request as she climbed down from her vehicle an joined the jubilating crow.

The occasion was climaxed by traditional performances, singing and dancing.

On their way, many singers chanted: “Lose You Face the Redeemer Don Cam!”

The team toured the city monitoring projects designed by the Government such as the electricity and road projects, the Kono Library, the Nafaya Bridge, among others. Later, the team met with the Chiefs and Stakeholders of the town at the town centre were the Madam Konamani expressed thanks and appreciations to her people for the welcome.