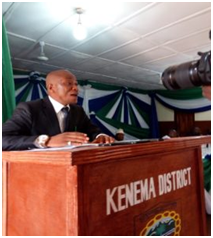 He added: “We are joining the President to change this situation and make youth partners in development,” he said adding that, “We are here to make our youth useful component in rolling out the New Direction agenda.”

Speaking further on President Julius Maada Bio’s vision, he said the New Direction manifesto is the People’s Manifesto because it was developed based on a consultative dialogue with the people of Sierra Leone including the youth.

According to him, the Youth Service Scheme has a lot of opportunities for both the youth and the society in general. He went on to highlight some of the benefits of the National Youth Scheme.

He went on to state that: “The New Direction is here to promote awareness and peaceful co-existence among all tribes, political and religious groups.”

The Paramount Chief of Small Bo Chiefdom, PC Daffie Banya commended the imitative and promised to support the Ministry of Youth Affairs to ensure this vision is achieved. He went on to say that this initiative had started long ago in some other African countries and that many people on the African continent are currently enjoying the successful implementation of this scheme.