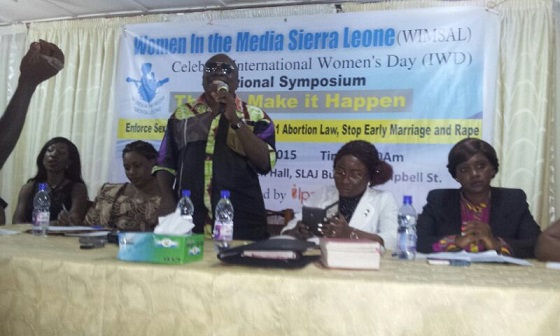 Moijueh Kaikai, according to eyewitnesses, resisted the urge to respond in like manner as he was able to restrain himself from physically or verbally attacking his deputy.

While it remains unclear as to the exact concerns that provoked Attila’s rage, he was however heard shouting that he was not going to leave Moijueh’s office until the minister refunded the money he used to repair his vehicle and buy tyres. He further prevented the Minister from leaving the scene, noting that he was only going to leave over his dead body.

Attila made several grave allegations against Moijueh while bluffing that he has communicated such concerns to the President.

He accused Moijueh of being a rapist, drug addict, tribalist, opportunist and woman beater, and that Moijueh was not even an APC member.

Attila stunned the eyewitnesses when he decided to direct the insults at Moijueh’s mother, and vowed that he will never be in speaking terms with the minister.

Moijueh reportedly did not react to the provocation of his deputy even when he was described as ‘Satan’.

Attila even threatened to remove the television in Moijueh’s office and transfer it to his own office.

The general public is outraged over the action of Attila who was expected to have behaved as a government representative no matter his concerns, while Moijueh is being widely applauded for advising himself to be calm throughout the riot.