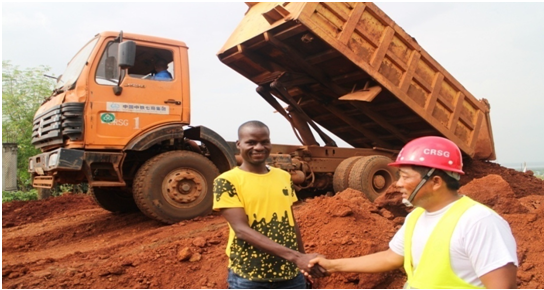 Outlining circumstances surrounding their intervention, under what he described as the CRSG Highway Project, the Project Coordinator, Mr. Shaw, said during the implementation of their road work, residents demonstrated sense of commitment, cooperation and collaboration in every aspect, including demolition of hitherto existing facilities, noise pollution and other environmental hazards encountered as a result of the ongoing construction work. On realizing the urgent need for the construction of  the community Centre, Mr. Shaw said they appointed a technician to get the specific location of the community center and instructed workmen to clear and level the road, using excavators, front loaders, dump trucks and other equipment and personnel and chose better quality of backfilling soil for leveling and foundation work.  The Project Coordinator averred that the company’s fulfillment of its Corporate Social Responsibility has not only served as an impetus to successful implementation of its road project but also enhanced the recognition of local staff, helped establish good image, attract more personnel and promote the localization of CRSG in Sierra Leone. A resident in charge of the Community Centre Project, said work on the project came to a halt because of lack of basic needs, including funds, vehicles and soil for backfilling. He expressed appreciation and gratitude to CRSG highway project management for the assistance and pledged their continued cooperation while acknowledging CRSG’’s marvelous road construction work. In another engagement, under the CRSG Eastern Municipal Project, the company on 2nd December 2017, provided electricity supply and water tanks for residents of Hamilton Village leaving within their areas of operation free of charge. According to Mr. Shaw their desire was to complement government’s efforts as many households in the village still couldn’t enjoy the convenience of electricity because of their remote locations. He said the villagers depend on the flow of water from the mountain, adding that there is no water tank or other water and electricity facilities. This, he said, prompted them to intervene by providing cables, light bulbs and other materials including power supply throughout the year to meet the electricity demand of the community. He disclosed that they also provided two large water tanks to serve as a centralized supply of drinking water system for the community. Mr. Saw opined that the activity has effectively improved the quality of life of the residents in the community, deepened the friendship between CRSG and the local people, promoted the influence of the “family culture” of CRSG in Sierra Leone and created a good external environment for the subsequent production in the quarry at the eastern municipal project. The community coordinator, on behalf of his compatriots, also expressed appreciation and gratitude for the gesture.