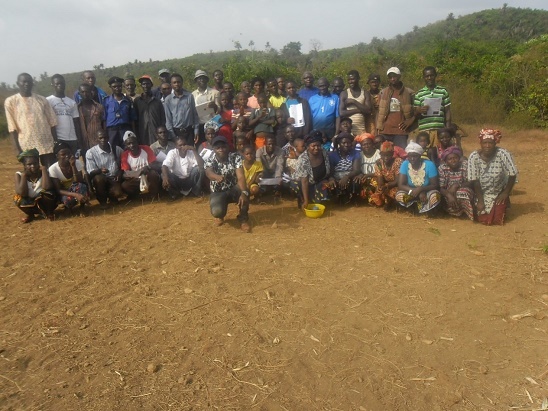 The items include seed rice, maize, agro chemicals, fertilizer, pesticides and power tillers for farmers within the western area district. Dignitaries present included The Minister of Agriculture, Forestry, and Food security Prof. Monty Jones and his entourage ,  Mr Shen Xiaokai, the Economic and Commercial Counsellor of the Chinese Embassy in Sierra Leone, the District agricultural officer, the Chinese technical team, National federation of farmers Sierra Leone representative and lot of farmers in the western Area.

During his statement, Mr Shen said for over 40 years China has been fulfilling its commitment to Sierra Leone with regard the agricultural technical cooperation project. He said China will continue to assist Sierra Leone in its developmental strides by providing technical support and assistance and by also providing training to help develop the human resource capacity of the workforce. He said more than 70 staff of the Ministry of Agriculture , Forestry and Food Security have gone to China for seminars and technical training courses in various areas of specialty this year. He thanked the China-Aid Agricultural Technical Cooperation Project team for their hard work and dedication. They have been providing technical expertise to indigenous farmers in areas like rice and vegetable planting, cultivation, pest control, and the management of their yield. In addition, farmers have been provided with seeds and fertilizers to help in the production process; as a result many have benefited in these communities. He said their effort will help in the self sufficiency of farmers in this Country.

Professor Monty Jones, The Minister of Agriculture, Forestry and Food Security received the items on behalf of the government of Sierra Leone. In his keynote remarks the Minister expressed thanks and appreciation to the Chinese government for the tremendous support to Sierra Leone over the years and more specifically to the Agriculture sector.  He said”China and Sierra Leone are just like one people in my opinion, they have been with us since 1970”. He said the Chinese are very helpful people, they built the National Stadium, Youyi Building, Bo Stadium, Foreign Affairs building, the Regent road,  Jui Friendship hospital to name but a few. He said a friend who is there when you need him is a good friend, thus we should embrace the Chinese as they are true friends. He also thank His Excellency the President Dr. Ernest Bai Koroma for making Agriculture his number one priority and said without his support they would not have made the progress they are currently making. He furthered that Agriculture should be the engine of Sierra Leone’s development and that the President’s Agenda for Prosperity and post Ebola recovery priorities are all geared towards enhancing better quality of life for the people of this country . He said there is a revolution going on in the Agriculture sector based on the policies they have put in place. As a Ministry, our priority is to serve the farmers by providing the necessary support the need in the production process he commented. He concluded by assuring the Economic Counsellor that the donation will be put in good use.