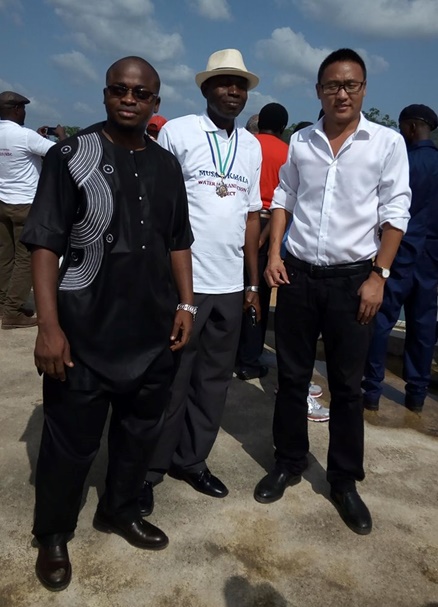 CHICO is specialized in engineering construction, water supply, water purifying, hydroelectricity, road and bridge constructions. The company has a parent body in China and well known for unique construction services in many parts of the world.

CHICO Vice President said they are working on 4 projects in Sierra Leone, which include the Kabala Water Project, 3 Town Water Project in Kenema City, Makeni City and the Yeyi-Kono road construction.

Delivery his statement, Kong noted their efforts and hard work in the Kabala Water Project. He expressed happiness over what he described as a success. “I am standing in Musaia Court Barray to welcome the pre-commissioning of Kabala Water supply project” he disclosed pointing out that “It is my great honor to speak on behalf of our company, CHICO, the contractor of the project and I cannot described how excited I am currently to witness the occasion”.

He said the project is being implemented by SALWACO since 2011 with funding from IDB, BADEA and the Government of Sierra Leone. He described the project as a landmark and one of the government flagship projects in the country.”Through five years unremitting efforts, the City of Kabala is now supplied with clean water, which is quite laudable” he stated adding that, I would like to express my sincere gratitude to all of you for your trust and support during the construction of the project.

According to him, CHICO performance in the phase one of the projects earned them prowess as well as Laurent in this part of the world and they were able to attract other projects including Yiye-Safadu Road Project and TTWSSP LOT2. He said the Kabala project was not only very significant but merely a success story to live and tell.

“CHICO is confident in its strength for engineering construction, water supply, water purification, road and bridge constructions” he categorically stated. He registered their strong concern as saying that they look forward to winning and implementing more projects in order to transform the country into a hub of unique and dynamic innovation.