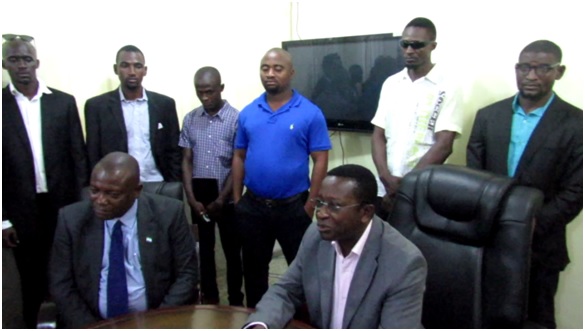 Declaring open the hurriedly-convened meeting held at NATCOM headquarter, Hill Station in Freetown on Monday 27th August, 2018, the Director of Consumer and Corporate Affairs, Abdul Kuyateh welcomed the NATCOM Chairman and the newly-appointed director and his deputy; citing that the staff are willing, ready and capable of taking the Commission in a new direction for the benefit of Sierra Leone, adding that they have no doubt as to the capability of the incoming DG, having previously worked in another top capacity at NATCOM.

Before introducing the two top administrators, the Chairman of NATCOM, Dr. Prince Alex Harding informed junior and senior staff of his commitment to providing quality leadership for the progress of NATCOM and its related services and systems as they affect consumers and the telecom service providers in general.

He informed NATCOM staff that following his appointment as Chairman, he ordered for an intensive audit of the systems and processes at NATCOM for him to know the status of the administrative, financial, logistical and other sections of the sole telecommunications regulator in Sierra Leone.

He added that he is of no doubt that Maxwell Hingha Massaquoi and Daniel Kaitibi as Director General and Deputy Director General respectively will bring to NATCOM a wealth of experience and knowledge in ITC and related fields that would see NATCOM becoming bigger and better capable of managing the ever-widening and increasing telecommunication traffic in order to be competitive in this age of ICT, adding that no country can grow faster than its ICT development. He admonished NATCOM staff to work together for the overall national good and not to encourage tribal, regional and other attitudes that are counter-productive in public institutions, adding “Only God knows who the actual laborers are

In his brief remarks, the incoming NATCOM Director General, Mr. Maxwell Hingha Massaquoi welcomed the reception given him and his deputy, adding that with their cooperation, loyalty and dedication to service NATCOM will be transformed into a stronger institution capable of independently carrying out its mandate without interference. He lamented that currently certain legal and other aspects are hampering the viability of NATCOM to make its impact felt by both service providers and consumers. He maintained that in some other countries data services and other statistics are daily published for the information of consumers but that in Sierra Leone the situation has left most subscribers with the feeling they are being cheated and nothing is being done about it.

DG Mr. Maxwell Hingha Massaquoi appealed to all NATCOM staff for their cooperation in taking the institution forward and promised that he will try his best to ensure that staff morale, welfare and other aspects which can improve the institution’s administrative and other departments are not only immediately reviewed but sustained.

The Deputy Director General Daniel Kaitibi who is a former lecturer in ICT also made salient remarks followed by statements from the various heads of departments including Finance, Administration, Drivers, Sanitary, Technical, Legal, Estate among others.