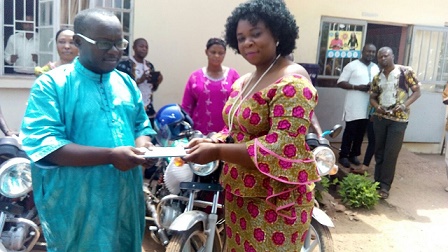 The aimed of the donated bikes was to tackle and salvage the numerous transportation problems faced by community health nurses in six Peripheral Health Units, PHU’s, at the Magbema and Gbinieh Dixon Chiefdoms in the Kaimbia District.

Giving an overview of the occasion, the Programme Manager, German Kooperation-Sierra Leone, John Tholley established that supporting the country’s health sector, happened to be one of their major objectives. As he added that they were at the Kamiba District Hospital in fulfillment of that objective. He further stated that his organization secured funding from the Japanese government through the United Nations Development Programme, UNDP, for the implemented project. He encouraged the Kambia DHMT to fully monitor and ensure the donated bikes are used for what it meant for.

Representing, UNDP, was the Field Officer Andrew Kalter, he thanked the German Kooperation for implementing the project for which they received funding. He went on to say that his organization would continue to work with the German Kooperation-Sierra Leone (GEKO-SL) as they had always proven to be credible. Andrew furthered that the money they used to fund the project was given to them by the Japanese government on behalf of GEKO-SL.

The Development and Planning Officer of the Kambia District Council expressed thanks and appreciation to GEKO-SL for such a laudable support to the health sector of their district. He added that as a responsible council they would closely monitor the work of DHMT, in order to ensure that the donated bikes were properly utilized, as he assured GEKO-SL that his council’s doors are always open to them, whenever they need their support.

Dr. Kakay noted that  “with the availability of motorbikes at the  six PHU’s of the two targeted chiefdoms, community health nurses will  be able to effectively and efficiently carryout their respective duties; by reaching and attending to patients, at remote places within their areas of operations”.

The Executive Director, GEKO-SL, Isata Conteh submitted that they were in Kambia in fulfillment of one of their paramount objectives, which was to ensure mobility easier for health workers. Isata went on to say that the bikes were handed to DHMT, in order for them to ensure that community health nurses salvage the compounded health issues, in underserved communities.

The Executive Director pleaded with the nurses to use the motorbikes for its intended purposes and not for their personal activities.

She officially handed the motorbikes keys and life cards to Dr. Kakay, on behalf of the six community health nurses.

The community health nurses applauded GEKO-SL for the donation and promised to use the motorbikes for its intended purposes.