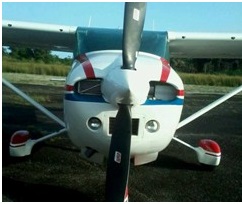 The purpose of their visit was to inspect the Airstrip in Bonthe in a bid to see the possibility for landing the air-taxies on Sherbro Island to promote tourism.
The Mayor of Bonthe, Layemin Joe Sandi went with the team to the Airstrip where various observations were mad. According to the Mayor, the Aviation Department has trained two Bonthonians as Air-traffic Controller and Fire Force Officer, respectively.
A security officer has also been employed and the company intends to employ ten more workers after the approval of their activities by the Minister.
The company has also done minor repairs on the Runway and the waiting room and has15 drums of reserved fuel in Bonthe and a fire extinguisher.
Recently the Mayor said they landed two crafts (4 and 8 8 seaters) and took-off severally at night in Bonthe.
According to them, he said they had a new Pilot who was not familiar with the terrain. Also, in the case that they had guests at night, he said they will fly in with all ease.
Runway Lights were displayed everywhere around the runway to help the Pilots to safely land. The community was taken unawares, causing a lot of panic which was later addressed.
The Versatile Air Services also plans to provide Community services and to also respond to emergencies.