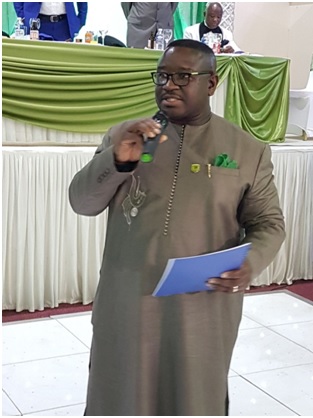 He was speaking at the prestigious Royal Regency Hall in London where he said as a man who has a solid track record as a disciplinarian, he has continued to attract many voters who feel the country needs a strong and disciplined leadership.

Cataloguing the current state of the country, Bio spoke about a divided country, the poor drowning in poverty, rich swimming in affluence, poor governance, battered economy, high public debt, third hungriest country, high inflation among others. He also reminded his audience that many of the things which necessitated the war such as bad governance, mismanagement of the economy, injustice have been the features of the current APC Government.

However, Bio’s message was not just about the doom and gloom but also making a case why he is the right choice that the country needs. He spoke about his track record, experience and how he has always put his country first. “Some have come with slogan, country first, but I served my country first at a very tender age. I did not go around the world to work and come back old to say country first. When I was young I gave my life to our country,” a passionate Bio said.

Continuing his message on why it will not be business as usual under his leadership Bio also cited instances of where monies collected by MDAs are not being put into the consolidated fund, adding that “If we are collecting money but not putting it in the consolidated fund then we have no reason to collect it”. It is the kind of disciplined leadership the Diaspora audience wanted to see and hear.

With his usual humility after delivering his statement, Rtd. Brigadier Julius Maada Bio went table after table thanking the guests for gracing the fundraising dinner as a sign of confidence in his leadership during which he was also mobbed for photo opportunity. The show of love and affective towards Bio continues to demonstrate his huge popularity at home and abroad.  The guests were not just members of SLPP but also Sierra Leonean professionals, experts, business people, workers from both public and private sectors etc who live in the United Kingdom.

The fundraising event will go down as one of the largest political gatherings in the United Kingdom organised by any political party. The SLPP UK & I Regional Chairman, Mohamed Yongawo, the entire executive and general membership should be proud of a very successful event.