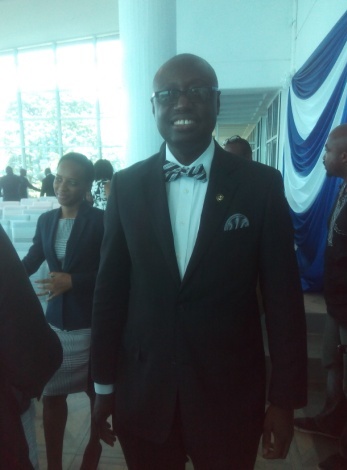 Addressing his members at the opening session on Thursday 2nd June 2016, the outgoing President of the Bar, Ibrahim Sorie said the Association has achieved a lot over the years during his tenure, some of which include the acquisition of a nine town lot at Bellaire Park for the construction of a new Secretariat. He pledged his support to realize this goal. “We are proud of the formation of the Legal Aid Board that provides free legal services to the public,” the President said, and added that the Association recorded 250% increase in their financial income and have maintained transparency and accountability.

The Commissioner of the Anti-Corruption Commission, Ady Macauley said corruption is the main cause of abject poverty and civil strife in the world. He named greed, selfishness, low salaries, poor record keeping, poor services from the police and judiciary as some of the main causes of the problems of corruption in Sierra Leone. He added that the fight against corruption demands extraordinary measures.  The ACC, he said will sustain step up its prevention, prosecution and suppression of corruption in the country. Commissioner Macauley pointed out that the Commission will go after grand and petty corruption and will use the elephant and fly approach.

The ACC Boss revealed that Integrated Management Committees will be formed in Ministries, Departments and Agencies of government to ensure that private sector entities dealing with MDAs commit themselves that they will not offer bribe and also MDAs not receiving bribe. He called on the Bar Association to fully come onboard the fight against corruption. “I know they’re a few bad apples amongst majority of our good Lawyers. I will not hesitate to come down heavily on colleagues who fall foul,” Commissioner Macauley said.

The Attorney General and Minister of Justice, Joseph F. Kamara commended the Bar Association for its successes scored over the years, and further pledged government’s commitment in providing a friendly environment for Bar Members to operate. He said his Office will continue to pursue the fight against corruption and admonished Members of the Bar to join the trend to ensure zero tolerance on corruption.

Honorable Nicholas C. Browne Marke thanked the Bar Association for a job well done over the years and assured that the Judiciary will continue to work towards ensuring the dispensation of a fair justice in the country.