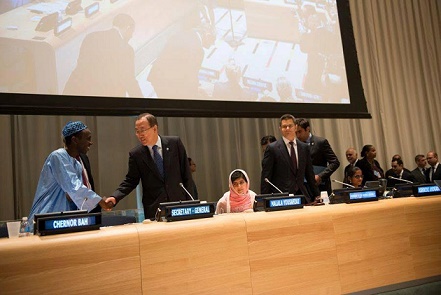 “Today, I can announce that we are forming a new Advisory Group to study progress on that Resolution,” he said, referring to the groundbreaking Security Council Resolution 2250 which was adopted last December and for the first time recognizes the unique role youth play in promoting global peace and security.

“Nearly half of that Group’s members are young. Some of them survived conflict. One lost her father in war. Another was shot. Others were refugees,” the UN Scribe said of the Group.

Responding to the news, Chernor Bah, who currently leads an innovative post-Ebola project at the Population Council in New York, said: “It’s an honor to be named by the UN Secretary General to another influential board. This hopefully reflects the quality of the work I have been doing in the international arena and the faith of the SG and other key agencies in my leadership and abilities.”

Bah promised to do his best to repay this confidence not only for Mr. Ban, “but as a representative of my country (Sierra Leone) and the millions of young people- especially girls, whose issues I continue to champion in my work and in my advocacy,” he said.

Asked on what his appointment meant for Sierra Leone, Bah, who was also very instrumental in developing strategies to support girls affected by the Ebola, emphasized: “I think the appointment means that the unique issues of Sierra Leone will be represented at the highest level.”

He continued: “It’s the first time the Security Council is considering these critical issues and to have me bringing in my Sierra Leone and other global expertise is a huge bonus.”

Graeme Simpson of South Africa, Director of Interpeace USA was appointed Lead Author and the findings and recommendations of the Study will be presented to the Security Council in December 2016.

This is the second time the United Nations Scribe has appointed Chernor Bah to a high-level panel with the first being in 2012 when he was named on the Secretary General’s signature Global Education First Initiative’s High Level Steering group as the global youth representative. Chernor Bah has been an activist and lead champion of children’s rights since he was 15 years old, when he was the founding President of the Children’s Forum Network in Sierra Leone. He has gone on to champion youth, education and girls’ rights in conflict and post conflict settings and is the recipient of numerous global and national awards. He holds a Masters in International Peace Studies from the University of Notre Dame.