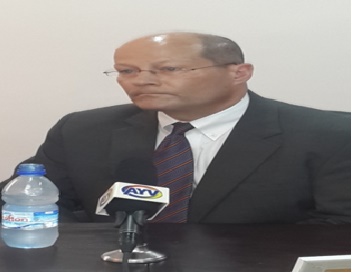 He reminded the Ambassador that the AYV dream of the young business entrepreneur Anthony Navo (Jnr) is being supported by young professionals from various works of life constituting the AYV team.

He assured that the institution will stay independent at all times, even amid challenges.

Gerjawi spoke of his passion to support media growth in Sierra Leone and assured that Africell will continue to give AYV the required support to ensure the media empire attains its goals.

Responding, the U.S Ambassador John Hoover said he was positively surprised over the media advancement at AYV, while urging the team to stay independent and maintain its credibility.

He said the staff members truly represent what the institution stands for – empowerment of young people.

The Ambassador further disclosed that the Embassy was open to partnership with a credible independent institution like the AYV, especially in the area of civic education.

A plaque of appreciation was presented to the Ambassador before leaving the premises.