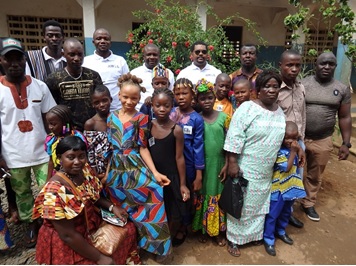 “Since 2007 AWOL has been supporting the education sector through scholarships and the annual school feeding and awards program. So it is just natural that we support His Excellency President Julius Maada Bio’s Free Education agenda,” said Amb. Navo, who’s also the owner and Executive Chairman of Africa Young Voices Media Empire.

Incidentally, the foundation of the Alton Hope School was laid by President Bio when he was Head of State of the National Provisional Ruling Council in 1996.

According to the current Proprietor, Samuel Victor Solomon, President Bio further supported the construction and completion of the school and regularly provided food items for the pupils, who were mainly displaced by the rebel war.

“The school was founded by the Late Madam Julie Finney. It was nicknamed ‘Bulgur School’ because President Bio ensured the school never ran out of supplies,” explained Samuel.

However, Samuel alleged that in 2017 Government withdrew all the teachers from the school and even went to the extent of closing it down without any explanation.

Early in the day, AWOL first visited the Police Primary School at Kingtom and celebrated with the pupils and teachers there.

At both schools, Amb. Navo Jnr. gave a brief history of the formation of the development organization and its ideology and principles.

“At AWOL we are brothers and sisters from different backgrounds and professions who came together to give back to society and also to complement the effort of the Government of the day in nation building. That is why we support no political party but Sierra Leone as a whole,” said Ambassador Navo.

Talking about the importance of the Day of the African Child, Dr. Ezekiel Duramany Lakkoh admonished the pupils to be inspired by the history of the day itself and to pursue their dreams in life.

“You should walk away from that bloody history and be free African children with your destinies in your hands,” said Dr. Lakkoh. He further urged the pupils to avoid ‘cliques and gangs’ if they wanted to be the future leaders their parents desired of them.

Speaking on the theme: “Education is the key”, the Secretary General of AWOL, Ahmed Sahid Nasralla, said the value of education to the welfare, well-being and development of children, as well as the country, cannot be over-emphasized.

Nasralla admonished the pupils to pay attention and study hard; to respect their teachers and their parents/guardians; to respect their classmates, each other’s views and differences and to believe in their individual abilities.

Meanwhile, the heads of both schools lamented the constraints they are facing, ranging from lack of furniture to capacity building.

Founded in 1966, the Police Primary School is located at the Police barracks at Kingtom, but Head Teacher Elizabeth K. Allieu said they are receiving little or no support from the Sierra Leone Police. She said they need support for a library and completion of the school fence.

Similarly, the Proprietor of Alton Hope School said their teachers are not on Government pay roll and most of the classrooms are empty with no furniture.

Meanwhile, Ambassador Navo Jnr. said AWOL will meet as a body and try to help.