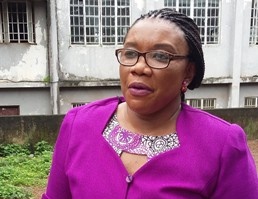 The Western Area Commissioner Miatta French informed Awoko that the BD process is done to distinguish Wards and Constituencies for the purpose of conducting elections.
Boundary Delimitation process as defined in the constitution of Sierra Leone says that the Electoral Commission shall divide the country into constituencies for the purpose of electing Members of Parliament.
Also it is provided that NEC shall review constituency boundaries at intervals of 5 and 7 years. The last BD process was done in 2006 and 2007 for Parliamentary and Wards in the Local Council.
Commissioner French said this process is simultaneously going on all around the country. The process of engagement is to inform the different stakeholders about the process and also to know what they want to be added or what “should stay as it is for the next elections.”
During the meeting held at the YWCA new hall, Commissioner French disclosed that for Western Urban “we have done all the allocations where each boundary begins and where it ends and the same for the Wards.”
She said Western urban has had an increase from 17 seats to 20, “we took our time to explain as to how the increase came about” which she said, “the Parliamentarians welcomed.”
Honourable Francis Kowa of Constituency 117 said, “so far we appreciate this process because it helps us to know what is happening in the Boundary Delimitation process. We are all trying to understand its inception and its effects on us”.
He told Awoko that “from the explanation justified by a standard best practice wherein the mean is 53,000 (fifty three thousand) per constituency, and there is the standard deviation of -25 or + 25, and with the increase of population of over 300,000 (three hundred thousand) if you work that out, by 53,000 you will have about six to seven additional seats in the Western Area. With this increase from my point of view I believe it is acceptable and it is reasonable”.
Explaining further about the allocations of Wards in the different Local Councils, Commissioner Miatta French said, “these are little hitches as the wards decrease by one. Before this time there were 49 Wards in the Urban area and one has been deducted so they now have 48”.
She said the people don’t seem to “accept it because they are looking at the fact that if the population increase, automatically the Ward should increase.”
She maintained that there is a law, which states “no matter the population each Ward should have at least 12 seats before dividing it by population and that affects the distribution of the Wards”.
Councillor Shedrack Ahmed Kanu of Ward 353 said “we appreciate the whole process and most of the issues I had have been discussed and I now fully understand the process”.
On the issue of losing a seat, he said, “this means a lot because even before this time manning a Ward in terms of development has been very difficult. And losing another seat means that development will be lacking in lots of Wards. Most councillors will be over stretched. For this issue I am foreseeing problems with our Ward Members as they always expect much from us in the area of development we were even thinking that they should add the wards instead they have reduced it, that is a problem”.