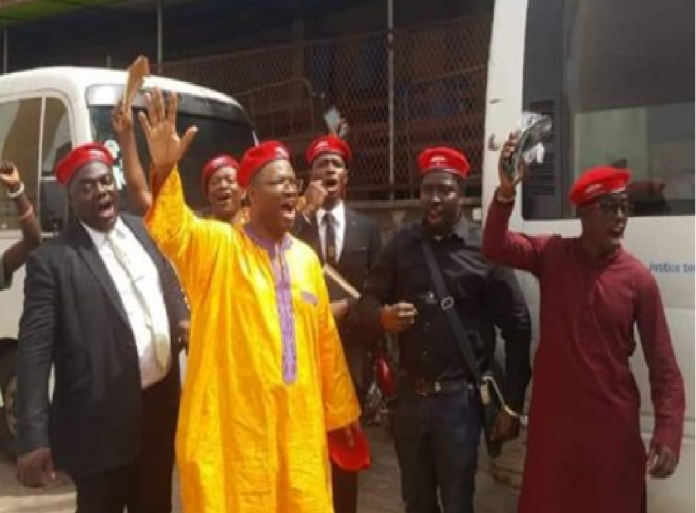 Hon. Justice Komba Kamanda presiding over the High Court N0.2 at Siaka Steven Stevens Street in Freetown has struck out a Notice of Motion filed by Lawyer Hindolo Gevao with a court cost of four million leones.

A week ago, the High Court of Sierra Leone slammed an injunction in favor of the plaintiff’s lawyer who had prayed for a proposed draft constitution to form part of the APC Constitution and other issues.

As a result, the opposition All People’s Congress was restrained by the High Court of Sierra Leone, on the orders of Hon. Justice Komba Kamanda who put the entire processes on hold.

But after Counsel for both the Plaintiff and defendant argued, the presiding judge gathered that the plaintiff’s affidavit was filed and dated 14 January 2020.

He further told the court that the plaintiff’s affidavit should contain facts and should be checked and double checked to avoid mistakes and administrative blunders.

Hon. Justice Kamanda intimated that it is not the duty of a Judge to the correct the papers of a lawyer, and that since the plaintiff’s Notice of Motion is defective with regard to date on the face of the motion, he had no option but to strike out lawyer Hindolo Gevao’s Notice of Motion.

In light of the above, Counsel for the defendants, Warrah Serry Kamal  raised series of preliminary objections with regards the originating Notice of Motion filed by Counsel for the plaintiff, Hindolo Gevao, dated 15th January 2020.

She submitted that Lawyer Gevao’s Originating Notice of Motion is defective and irregular in all its forms. Lawyer Serry Kamal submitted that the High Court lacks the jurisdiction to hear such matter, on the grounds that it is the Supreme Court that should interpret and determine such constitutional matter.

According to lawyer Serry Kamal, it is the Supreme Court that has the original jurisdiction to adjudicate such matters, adding that lawyer Hindolo Gevao has no Locus Standi to bring such action against the defendants.

She also argued that lawyer Gevao should ensure that he has no Locus Standi and the capacity to establish that he has private legal claims.

Barrister Serry Kamal went on to say that the plaintiff did not exhibit any membership card, delegate status, and therefore he is not entitle to challenge issues relating to the then national delegate conference.

The plaintiff lawyer, she said did not establish whether the plaintiffs have met their financial obligations, and that they should be fully paid-up members.

Concluding, Lawyer Serry Kamal stated that the plaintiff’s Originating Notice of Motion was not sealed and the originating processes were not served on the defendants, like Ex-President Ernest Bai Koroma and the Secretary General of the opposition All People’s Congress Party, Dr. Alhaji Osman Foday Yansaneh.

However, Counsel for the Plaintiff Hindolo Gavoe is expected to reply to Lawyer Warrah Serry Kamala’s submission on the next adjourned date.

The Plaintiffs Applicants in the matter are Alfred Mainkailu Koroma, Abdul Karim Kapoi, Sulayman Kamara all of 25 Pademba road Freetown and the 1st Defendant, Alhaji Osman Foday Yansaneh, National Secretary General of the APC, of 11 Old Railway Line Freetown and Dr. Ernest Bai Koroma the 2nd Defendant Chairman and Leader of the All People’s Congress Party.