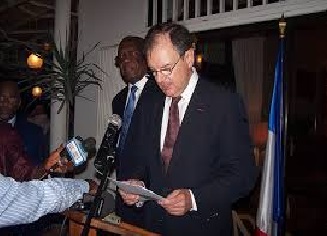 He maintained he was very grateful to the Government of Sierra Leone for having facilitated the whole process. The result he claimed, speaks for itself, and deserves warm applauses.

He said he knows an honorary consulate is not a diplomatic officer or an embassy. The Ambassador noted that he can easily anticipate the wish of their Sierra Leonean friends to see France reopen an embassy; while revealing that for the time being, budgetary constraints are too high and too heavy.

Sierra Leone he noted is one the most severely affected countries and is now Ebola-free. In this respect, the Ambassador paid special tribute to the involvement of the Sierra Leonean authorities in the fight against the epidemic, as well as to all members of the international community, particularly the UK and the United Nations that committed to their task in Sierra Leone, as they were dedicated to their task in Guinea.

The people of Sierra Leone he said deserve high consideration and respect for the way they reacted throughout the crisis and for their spirit of resilience. “We have learned a lot through this epidemic which is not over” he said.  Bertrand Cochery went on to state that it was a unique and unprecedented one, illustrated by the recent news cases in Liberia. He noted that they have also learned to work more closely together on both sides of the border in the area of Pamelap. He said that it is a good experience they must elaborate on under the aegis of the Mano River Union.

For France, he stated Sierra Leone means investment and they are confident in the future of the country under the leadership of President Ernest Bai Koroma.

He said with the end of Ebola, the road for new investments and cooperation is now re-opened. He promised more members of the mission in the French Embassy in Conakry would visit Freetown to partner in the areas of defense, teaching of French and development with the Agency of France for Development.

He promised the French Consulate in Conakry will do its best facilitate the issuing of visas.