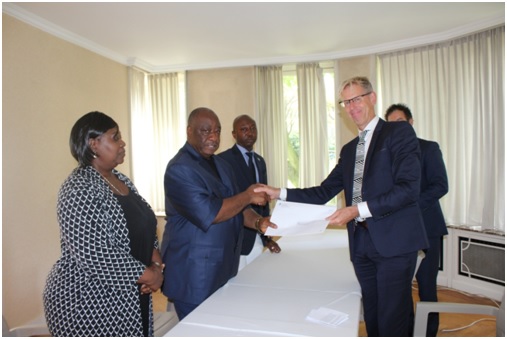 The statement further informed that the “EU has also activated its Emergency Copernicus mapping system to provide damage assessment maps to help with the relief efforts and a Commission humanitarian expert is on his way to assess the needs on the ground”.

In a related development, Belgium Prime Minister, Charles Michel on Tuesday, 22nd August, 2017 which marked the official end of the seven days mourning period for the flood and mudslides victims declared by the government, sent a special message of condolence to His Excellency, Dr. Ernest Bai Koroma and the people of Sierra Leone.

The special message was contained in a sealed envelope and delivered to Sierra Leone’s Ambassador to the Kingdom of Belgium, Hon. Ibrahim Sorie by the Belgium government’s Director of Sub-Saharan Africa in the Ministry of Foreign Affairs, Trade and Development Cooperation, His Excellency, Ambassador JozefSmets for onward transmission to the Head of State.

Ambassador Smets furthered that, in response to the call for assistance from the Sierra Leone Authorities, the Belgian government has decided to respond to this appeal by sending a Disaster Victim Identification Team from the Belgian Federal Police to help their Sierra Leonean colleagues identify the deceased victims. He said they will be joined by a Consular Officer from Foreign Affairs who will assist them. This team, according to Ambassador Smets is in addition to a Belgian First Aid and Support Team member who is already in Freetown contributing to the work of a UN Disaster and Coordination (UNDAC) team.

Meanwhile, the Secretariat of the ACP Group of States has also launched an Appeal for Assistance to its member states. “The ACP Secretariat on behalf of the Government of Sierra Leone, is launching an urgent appeal to ACP Member States to make voluntary financial donations to help alleviate the suffering, to address the immediate needs of the people affected by the landslides and to meet the long term challenges of rebuilding the country in the aftermath of this disaster”. A special account has been opened by the ACP to this effect.

Furthermore, a Belgian citizen of African descent, Dr. Francois Harelimana has donated 15 cartoons of assorted second-hand clothing towards the relief effort. The cartoons have been deposited at the Chancery building in Brussels.

Also, a special message of sympathy and condolence was sent to the Embassy by the Togolese Ambassador to the Kingdom of Belgium, who also doubles as the Coordinator of the ECOWAS Group of Ambassadors in Brussels on behalf of his group, the President, government and people of Togo.

Ambassadors who signed the Book of Condolence on Tuesday, 22nd August, 2017 to mark the end of the official mourning include that of Zambia, Senegal, Burundi, Guyana, Botswana, Angola and many others.