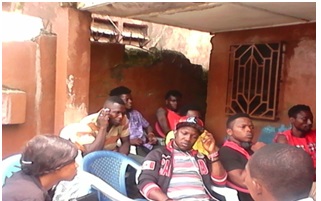 Speaking in his office on Berwick Street in Freetown, Mr Conteh urged the Government to adopt an alcohol policy that he suggests would help combat violence amongst young people in communities. In very strong terms, he condemned the violence activities perpetrated by various gang groups in Bo and Freetown.

According to him, the violence victimisation among young people witnessed in recent incidents in the two cities, was unfortunate and has the tendency to undermine the security of the State and the future of young people.

“We will like to remind all parties concerned to adhere to the universal principle of the rule of law which demands that the Government and its officials and agents are accountable under the law” Mr Conteh stated.

He reminded his audience that Sierra Leone has just emerged from a deadly fight to end the Ebola Virus Disease and therefore stressed the need to focus on post Ebola recovery activities in order to rebrand the country’s image, attract foreign investors and revamp its economy.

The Director of Anti Violence Movement said as civil society organization they remain supportive to the Sierra Leone Police to enforce security measures that are in line with the principle of professionalism and respect for human rights aimed at maintaining peace and tranquillity. He lamented that these nefarious acts perpetrated by cliques of young people have the potential to scare away investors and tourists and could undermine the country’s development progress.

Bernard Conteh appealed to the Sierra Leone Police to permit them to create a dialogue platform between these gangs and the police in the shortest possible time.

Members of the Blood, otherwise known as MOB, one of the biggest cliques in the country, pledged their loyalty to end violence.