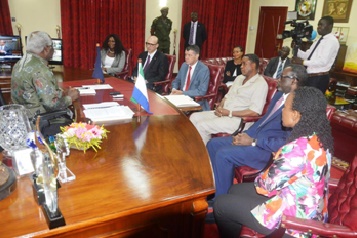 Addressing the delegation, President Koroma said the announcement is no longer surprising but that as government, they are looking forward to receiving details of the agreement.

“We cannot give an authorization until we are provided with full details of the agreement,” he said, saying that if the agreement is in line with the Local Content Policy like the retaining of staff that the CEO mentioned, government will continue to provide not only the physical enabling environment, but also the legal environment to ensure the business runs without hindrance. He expressed strong belief that telecommunication has an important role to play in the transformation of a country.

Through, the Airtel Africa CEO, President Koroma extended his profound thanks to the Chairman of Airtel for the support provided during the Ebola epidemic and further said that he was pleased that the CEO of Airtel Africa hailed Airtel Sierra Leone as their best subsidiary in Africa.

According to Christian de Faria, the decision to sell Airtel (SL) to Orange was reached by the shareholders and the protracted agreement between the two companies was virtually made Tuesday January 12, 2016. . He said if all goes well, effective from April 1st this year, the French company will take over Airtel (SL).