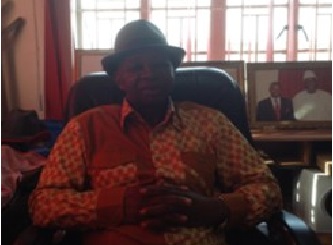 The APC Secretary General said the December 12 bye-election in Constituency 031 in the Bombali District where Kamarainba will contest against Alhaji Ibrahim Ben Kargbo, is a foregone conclusion, as there is no way he can defeat the APC strong man.

“Bombali is our strong hold. I.B. Kargbo is a seasoned politician who has the will and experience and he is a son of the soil, so a foreigner coming into his constituency to beat him will be absurd.”

Secretary General Osman Yansaneh averred that they have done their homework and will continue to do it until the bye-election is over. “Every seat lost by the party will definitely be regained by the party. We are still popular because we have been working for the people of Sierra Leone.”
Also talking about the other bye-election in the Kono District, the Ambassador said that that is their seat, as the former Member of Parliament; the late Honourable Augustine Tortu was representing them. He said they will again retain the seat, as they have already done their homework and have unanimously chosen the candidate that is the people’s choice, who is John Tucker.
Mr Tucker, he said was SLPP, but has defected to the APC and now he is a very strong member of the party. “He is the people’s choice and we will do everything in our power to make sure that he wins the bye-election for the party. We are confident and we will win every seat that was ours in the past. That is our seat in Kono and we will retain it, and come 2018, we will try to win more from the opposition.”
Ambassador Yansaneh congratulated his candidates that won last weekend’s bye-elections and advised them to be with their people, work with them and make sure they represent them appropriately in Parliament and in the local councils.
“I want them to know that they are representing the APC and the APC is in governance, it means they must seek the party’s interest and make sure that they work well so that come 2018, they will continue in governance.”
“We have shown the world that we are capable of winning elections because we are working for the people to improve their lives and make sure they live a life worth living. APC, he said, is the only party that can improve the lives of people and under President Koroma, everybody has seen that only the APC that can make them prosper.”
Ambassador Yansaneh reiterated that the reason for the economic challenge was due to the Ebola Virus Disease and the drop in the price of iron ore. He said they will revamp the economy and continue their infrastructural project all around the country; as well as provide jobs for the youths.
He called on all Sierra Leoneans to continue to be patient with them as they will improve their lives in the coming years. “Let us continue to support the President and his vision to improve your lives as the only way to prosperity will be a united Sierra Leone with no unrest. Now we have developed a culture of political exchange that is very good for the country, no fighting between parties as we all disagree to agree at the end when the result is announced.”