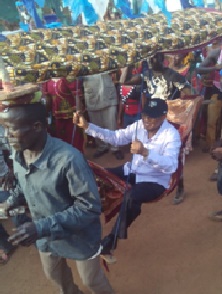 Company Officials assured that in as much as they are willing to make the Minister’s dream come true, the rice cultivation is plagued with the challenge of weeds. Over €80, 000 (eighty thousand Euro) has been spent to control weeds in their 500hecatres rice field. The company is hoping to produce three tons per hectare this year, and will further increase it to five tons when the weeds are suppressed.

However, there was a massive jubilation at Gbainty Wallah in the Lokomassama Chiefdom, Port Loko District as the people came out with their traditional musical instruments, singing, dancing and chanting the slogan ‘NUMBER ONE’ (a new title given to the Agric Minister) as a form of welcoming the Minister of Agriculture, Forestry and Food Security, Professor Patrick Monty Jones on Friday 6th January 2017. The Minister was accompanied by Senior Ministry Officials to perform a symbolic harvesting of over one thousand, five hundred areas of farm rice. Despite the challenges faced over the years in rice cultivation, the Gbainty Wallah Farmers pledged their willingness to ensure that the local market is flooded with locally produced food stuffs. Speaker after speaker assured of greater commitment to bring development to their community through agriculture. They however highlighted some constraints that are serving as bottlenecks to agricultural development in their community and the country. “We don’t have any Agricultural Business Centre (ABC) in our community,” they said.

Over the years, most of the rice harvested is sold in neighboring Guinea, which is closer to Gbainty Wallah. According to local farmers, they normally receive cash support from Guinean Traders in the form of loan to help finance their farming activities. They are to pay back with rice harvested at the end of the day. “We need financial and logistical support from the government so as to enable us produce more for the nation,” they requested.

The Minister, Professor Monty Jones said this is the time for agriculture in the country, which enables farmers to grow what they eat and flood the market with their produce. The Ministry, he said is ready to support farmers that are hardworking and committed to transform the agriculture sector. He challenged farmers to increase production and productivity, and that the Ministry will provide the required support.

The Minister also commended the people of Ferreh Village in the Lokomassama Chiefdom for cultivating over five hundred acres of rice, which will be harvested in March this year.

The Minister’s entourage includes the head of the Strategic Advisory Unit, Khalil Jah; the Chief Agriculture Officer and his Deputy; and the Public Relations Officer, Abubakarr Sidique Daramy.