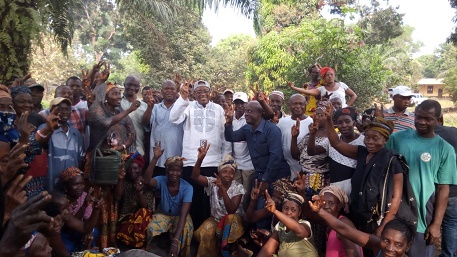 The tour happened as a result of the minister’s mandate to assess progress made in actualizing President Koroma’s priority initiative in the agriculture sector.

One of the visited farms, operated by the Tonkolili Women’s Youth Network, which had cultivated tomato, onions, pepper, and okra that were now available in the market, especially in the northern Makeni city.

In her revelation the leader of the Tonkolili Women’s Youth Network, Haja Isatu Conteh revealed that they are in farming not only to make money for their families and communities, but to also respond to the clarion call of President Koroma to make Sierra Leone food self-sufficient nation, through the increment of agricultural production and productivity. She pointed out that they have ten groups, which are targeting an acre of onions each, bringing it to ten acres in their communities.

Haja Isatu Conteh said “on behalf of my network I want to commend the Ministry of Agriculture, which has been supporting us to reach this height”. She pleaded with the Minister to provide them sufficient seedlings and tools so as to enable them increase productivity.

In his respond, the Minister of Agriculture, Professor Patrick Monty Jones thanked the women for the progress made and assured them of the ministry continuous support. “I am highly impressed with progress made so far, especially amongst growers of vegetables, cassava and other food crops”.

The minister advised the Network to target one hundred acres of onions in the whole district informed them that there is a market for onions in the country and noted that said Sierra Leone is blessed with land and innovative people. “We must tap these precious resources to have good yield of crops,” the Minister said.

The Minister and his entourage also visited a farm at Mayambari Village in the Tonkolili District where the Sakomnu Farmers Association has cultivated oil palm, cashew, cassava, pineapple, lettuce, onions, and pepper, among others. He was received by Chief Kapr Lowa, who briefed the Minister that they are committed to expand with the required support from the Ministry, and urged the Minister to help them with a cassava gratery machine so that they add value to their cassava project.

Professor Jones observed that farmers were finding it difficult to take their goods to the market. He advised that the private sector come in with mobile refrigerator vehicles to take perishable goods from the farm to sales point so that the farmers will make money. “The private sector should take over the purchasing and distribution process,” he noted.

The minister revealed that his Ministry expecting mobile refrigerator vehicles in the coming weeks to serve as a pilot project that will usher in the private sector.

The Minister and entourage also held a meeting with farmers that have been utilizing the fertile land of the Chinese Magbas Sugar Complex. It could be recalled that the farmers cultivated about 2, 400hectares of rice last year which they want to repeat this year and also expand on it.