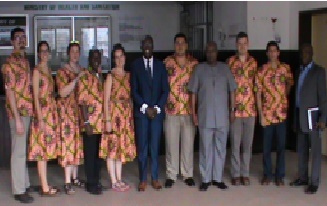 Health and Sanitation Minister, Dr. Abu Bakarr Fofanah recalled and underscored the importance of the Peace Corps services in Sierra Leone when the first batch of volunteers paid a courtesy call on him on Tuesday January 24, 2017 at his Youyi Building office in Freetown.

Welcoming the team, Dr. Fofanah recalled several engagements with their Home Office in Freetown prior to their arrival.

He noted the long history of successful collaboration in which most Sierra Leoneans countrywide benefited, with him not been an exception.

The Minister described the Peace Corps programme as invaluable, and assured them of a warm and receptive hospitality during their stay in the country.

Responding, the spokesperson, Associate Peace Crops Director for Health, Lonny Born, said their coming back to Sierra Leone after 22 years of experience is a comfortable journey, and promised to give their best in their various duty stations.

He said some of them have been here before and most of them, their first time in Sierra Leone but committed to ensure effective and satisfactory service delivery.

Their disciplines include Water and Sanitation, Nutrition and other specialties. They would be deployed in villages and towns in the Bombali, Tonkolili, Bo and Pujehun districts.