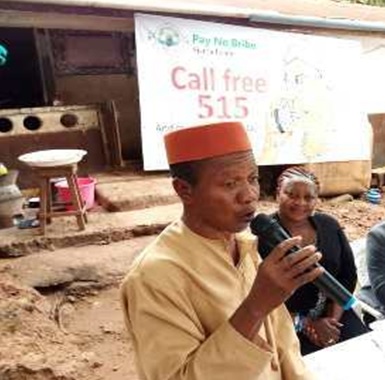 The Comms. Consultant encouraged the public to report bribery experiences-I paid, I resisted and I met an honest official.

Speaking on the overview of the campaign, Deputy Director Public Education and Outreach ACC, Patrick Sandi said, the PNB is the initiative of the Government of Sierra Leone with support from DFID.  Mr. Sandi underscored that, reporting on the platform is anonymous and through the 515 free line on all networks, the mobile APP to be downloaded on play store, and the website-www.pnb.gov.sl. He furthered that ACC is leading the campaign in collaboration with critical partners; the MDAs, CSOs, Coffey International and the media.

Deputy Director highlighted key positive actions taken by the MDAs to resolve the bribery problems emanating from reports received on the portal. He said, 23 checkpoints have been dismantled by the SLP, officers suspended, demoted, transferred and dismissed. Sandi also told the people of the banning of Saturday classes in Bo, Makeni, Kenema and Kono, coupled with the dismissal of two nurses by the District Medical Officer (DMO)-Bo. Mr. Sandi pleaded with the people to use the PNB system very well in order to deal with bribery and petty corruption issues in service delivery processes. Data is also collected on activities of the Judiciary relating to bribery reports from the public, Sandi concluded.

Animator-Campaign for Good Governance (CGG) Sheku Fofanah said, he was pleased to be in Kamayama to join in the sensitization drive. He emphasized that bribery affects the poor people in high magnitude, since they are conditioned to take from their nothing and pay bribes. Mr. Fofana explained how the mobile APP is used to report, noting, the focus really is on the use of the 515 because it is easily accessed by the greater majority of Sierra Leoneans.

Earlier, welcoming ACC to Kamayama, Section Chief Kebbay Conteh expressed great appreciation for the sensitization, as the community people had longed for this opportunity.  He revealed that there are a host of social services lacking in their community, but said, he was calling on Government to make available these services. Chief called on his people to feel very safe to report, but advised they must report the true happenings and not lies.