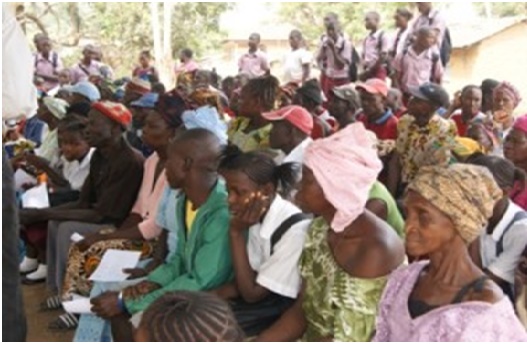 Dilating on the purpose of the meeting and key corruption issues, ACC Public Education Officer Abdulai Saccoh stated that the engagement is part of the Commission’s strategic move to spread anti-corruption messages to the nook and cranny of this country. Saccoh noted that the meeting was intended to heighten their awareness on the adverse effects of corruption and what would be their role to stamp it out in their community. The Public Educator disclosed that corruption is a sin denounced by the Holy Quran and Bible. Saccoh highlighted some corrupt practices that are prevalent in the school system, Social Safety Net Programme, the Free Health Care program (FHC) and Chiefdom Administration. He expressed his dissatisfaction over the misuse of school fees subsidy and Girl Child funds by some Head Teachers and Principals which he said undermines the progress of education in the district. In the area of the Free Health Care (FHC), the Public Educator warned that anyone caught hampering the success of FHC in the district would be dealt with accordingly.

Speaking on the roles of the community people in fighting corruption, ACC Senior Public Education Officer Al-Hassan Sesay thanked the people of Masongbo Limba for opening their doors to ACC. Sesay underscored the significance of the meeting noting that, it would go a long way in achieving positive change in the community. The Senior Public Educator stressed  that fighting corruption is not the business of the Commission alone but the collective effort of all citizens. He emphasized that the lives of Sierra Leoneans would only improve if they are united to fight the nation’s common enemy-corruption.

Sesay explained the various reporting mechanisms and read out ACC toll free lines: Africell: 077-985-985/077986-986, Airtel: 161. He guaranteed his audience of informant protection and cautioned them to abstain from making false/malicious report as that constitutes an indictable offence. The Senior Public Educator informed his audience that their role in the fight against corruption was to resist, reject and report any incidence of corruption to the Commission. He used the occasion to encourage those involved in corrupt practices to desist and do the right thing.

Earlier, the chief representative Pa Kandeh Bangura lauded the Commission’s efforts for taking the fight against corruption to rural community and pleaded that such engagement is extended to other communities as they suffer most from the brunt of corruption. He assured ACC of their unflinching support to fighting corruption and make Sierra Leone a better place.