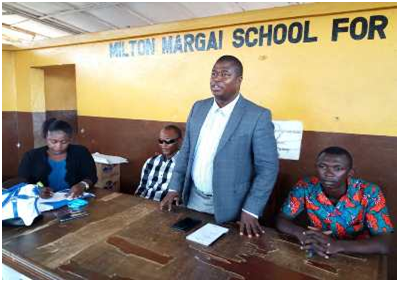 This commitment was made by ACC Deputy Director, Public Education and Outreach Patrick Sandi during the sensitization meetings on Tuesday 15th May at the National school for the Deaf and Dumb and Thursday 17th May 2018 at the Milton Margai School for the Blind at their campuses on Wilkinson Road, Freetown.

Mr. Sandi underscored ACC’s recognition of people with disabilities in the fight against bribery and small scale corruption for which reason it was soliciting their support. He also stated that, some people or organizations may want to take advantage of their disabilities to exploit them that was why the ACC was making serious interventions and empowering them to use the PNB 515 free line and report bribery experiences when accessing social services from Ministries, Departments and Agencies (MDAs), particularly in the Judiciary, Police, Health, Education, Water and Electricity. “The objective of the PNB is improving service delivery, therefore, all categories of the Sierra Leonean public should support this initiative of Government funded by DFID and GoSL” Deputy Director emphasized.

Mr. Sandi furthered that, MDAs have taken positive actions/measures to deal with bribery complaints made on the PNB reporting platform; ranging from the dismantling of 23 illegal checkpoints, demotion and dismissal of senior police personnel, rotation of Divisional and Regional traffic officers; banning of Saturday classes in Bo, Makeni, Kenema, and Kono, to the dismissal of nurses in Bo District by the District Medical Officer (DMO) for requesting bribes from pregnant women and lactating mothers.

In her presentation on the importance of the meetings, ACC’s Communications Consultant Olabisi Olu-Garrick said the engagements were meant to increase and deepen the knowledge of persons with disabilities on the PNB, as they were very critical to the anti-bribery campaign. She emphasized that ACC will continue to work with these institutions and lauded the administrations for their dedicated service to mankind. Madam Olu-Garrick further said, the PNB platform receives reports on three aspects: I paid a bribe, I resisted, and I met an honest official, and reaffirmed that the system is 100% anonymous.

In their statements at the meetings, the Head teachers Winifred Kamara-Cole school for the deaf and dumb and Salieu Turay- Milton Margai school for the Blind registered their support to the PNB campaign, noting it is an enviable initiative to tackle bribery and petty corruption, but stressed that ACC should collaborate with the Government to ensuring that MDAs are provided the needed resources timely to deliver on their mandates. They further requested the Commission to make the sensitization meetings periodic.