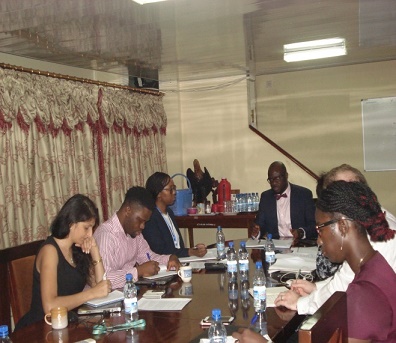 Setting the tone of the meeting, Commissioner Macauley expressed gratefulness to the British Government through the DFID for their support to the fight against corruption in Sierra Leone. He praised DFID for funding the PNB Campaign and expressed satisfaction that the pilot phase has been a huge success to the fight against bribery in the country. Mr. Macauley declared that the PNB campaign was his first major national project as Commissioner of the ACC and that he has dedicated his full strength and energy to ensure that it succeeds. Expressing how significant the project has been to the Commission, he intimated partners present that the PNB campaign has in some instances provided promptings to the Commission on some of its recent sting operations.  The Commissioner noted that the campaign is also at the heart of the Government of Sierra Leone and the President’s Recovery Priorities. He acknowledged that there are challenges but that these challenges have not affected the general successes of the campaign.

In her reflection, on the progress of the PNB, DFID Governance Adviser, Samira Bhatia mentioned that the Campaign had a rocky start after it was launched in 2014 due to the Ebola epidemic, but has had a wonderful progress since full operations were resumed in October 2016 after the reporting portal was unveiled.  She indicated that the need for a review was to provide cogent information on where we are in terms of indicators in the log frame and an analysis of reports in the portal. She said a review will give partners fair knowledge of the gaps and the gains made so far. Madam Bhatia further noted that DFID is keen on helping the ACC in areas relating to capacity building and technical support.

PNB Campaign Project Manager, Nabilahi Musa Kamara praised some MDA’s for their cooperation with the ACC in the implementation. He singled out the Sierra Leone Police for their unreserved support,  but noted that some MDA’s,  especially among the pilot ones are not willing to respond to reports on their institutions. According to the terms in the project, the first set of responses are expected after three months, that is January 2017.

It must be noted that the PNB is a 4.7 M pounds five year program aimed at reducing bribery in service delivery institutions in Sierra Leone. The five pilot sectors are health, education, water, sanitation and energy. The project is a scientific approach to the fight against bribery which is based on anonymous reporting, collecting base line data on petty corruption and conducting a trend analysis on the pattern and of the occurrence of bribery in MDA’s.

Present in the meeting were the Chief Executive Officer of the Millennium Challenge Corporation Unit, Ndeye Koroma and Director of Coffey International, Mark White.