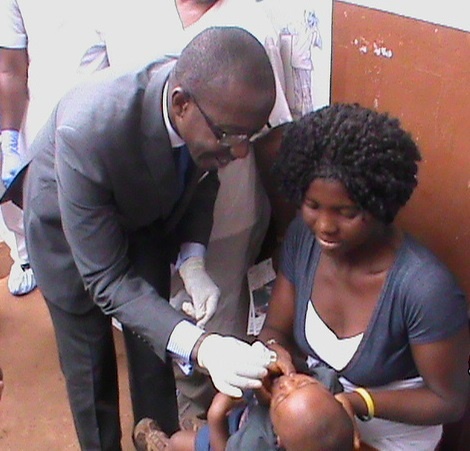 The PRP is basically a document that has been put together by the government to take the country forward after the Ebola outbreak. Phase one targeted sectors like education, health and the private sector.

According to the Delivery Team Lead, Yvonne Aki Sawyer, the initiative has evolved and the second phase would now include other sectors like energy and governance.

“What we are building now should last the test of time. This is going to be the way government is going to conduct business, going forward,” she said.

According to Dr Saran Kamara, who is also the Deputy Chief, the MoHS had made gains in the Post Ebola Recovery Plan and they had made some progress in the ongoing phase two of the initiative.

“In 2010 the government launched a free health care policy and we made a lot of gains with that until Ebola disrupted it,” she said.

Ebola did weaken the health system in the country and so there have been calls ever since for the government to invest in strengthening it.

In response, Kamara said one of the plans of the Ministry in the President’s Recovery Priorities is to invest in healthcare institutions.

“We want to increase the capacity of health institutions like the midwifery school,” she said.

At the moment there are plans for the ministry to build some more Midwifery schools across the country and train more midwives. Sierra Leone has one of the highest infant mortality rates in the world and problems like lack of midwives and even progresses like the free health care have not helped to stem the tide fast enough.

There are also concerns over how resources could be mobilized to pull off all these projects. Dr Kamara said they have succeeded in cleaning up the pay roll of the health sector and this might help in funding some of these initiatives.

“There are up to 755 unverified health workers on our pay roll. Removing them from the payroll could save the government $180,000 per month and up to $ 2 million per year,” she said.

However, different surveys in the health sector have shown that it is grossly understaffed, in proportion with the current population in the country. Plucking more than 700 staff from the system could have serious consequences if counter measures are not put in place.

As comprehensive as this overall plan may look, there have been concerns by civil society groups and religious leaders that they were not involved in drawing up the plan from the initial phase and this might prove to be a hindrance.

The government on their part , say it was important for the planning team to be kept as close as possible, considering the work load.

The Chief of Staff to the President, Saidu Conton Sesay, said:   “Civil society can always hold the process accountable.”

Marcella Samba Sesay, a civil society activist with the Campaign for Good Governance, said it was important for programs like the President’s Recovery Plan to produce real results.

“It is important for this project to succeed so that we could quantify the actual progress on the lives of every Sierra Leonean,” she said.

Her comments reechoed the views of many others in the civil society community at the meeting held at the Miatta Conference Center on Tuesday.