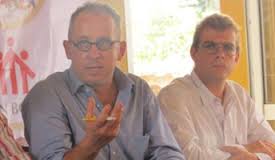 He further stated that the number of street children will continue to increase until parents commenced to take good care of their children right round the county, as he affirmed broken homes to be the major factor of the increment of street children.

In an exclusive interview with AYV Newspaper, Abdul Kamara d his disclosed that his guardian ill-treated him to the point that he chose the street to seek refuge. He further explained that his Aunt used to send him on domestic errands and the contrary she sent her biological children to school.

Ibrahim Kanu said he had no parent, nor a foster parent or guardian, as a result of this he had no one to take care of him so he chose the street as his home. To acquire his daily bread, Ibrahim said he collected scrap metal, pure water plastic and aluminum empty tin can which he eventually sold during day and the market tables are his home during the night, “honestly I am too young to struggle for my daily survival, perhaps, this is my destiny and the will of God, but my situation is pathetic due to the fact that I don’t have the opportunity to go to school” he ascertained.

Hassanatu Koroma, a concern parent expressed her dissatisfaction on some people that made it habitual to fetch children from villages and promised their parent that they will to support and empower the child/children with quality education, in the city. In most case these people did not keep their promises and they usually mistreats some of these children that wandering in the street.

On the contrary, another parent Gladys Taylor submitted that some of the children’s in the street were coming from a well to do homes, some of them did not want to be controlled and that they could be easily influenced by their peers.

The appropriate state authorities to handle children’s affairs in Sierra Leone are; the Ministry of Social Welfare Gender and Children’s Affairs and the National Commission for Children. National Commission for Children, Monitoring and Evaluation Officer, Alhaji Colleh Yillah established that the children’s commission happened to be super active in ensuring the best interest of the child. He confirmed that they have been promoting and protecting the rights of children’s across the country, he further explained that they are planning to sensitize parents and guardians on the laws that protects and promotes the affairs of the country’s children.

Yillah mentioned that there are rules and regulations governing children and that there are stipulated consequences for any parents or guardians that violates the fundamental human rights of their children.

He stressed that child labour and abuse happened to be a crime in Sierra Leone.

Children are the leaders of tomorrow, they need to be protected for a brighter future. The appropriate authorities need to do more to empower and capacitate the next generation.