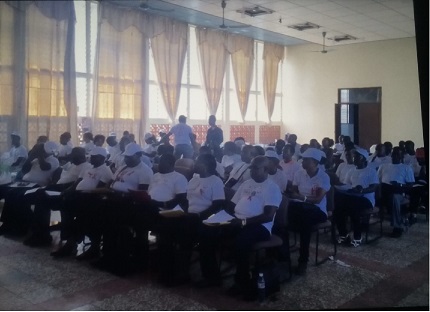 Mr Mansaray provided this statistics on Tuesday in Freetown, during a symposium to mark World AIDS Day.

He said there are strong, effective programs of people living with AIDS and they tend to now live longer; working with their partners. He noted they however are still faced with some challenges, including persistent stigma and discrimination, gender inequality, high rate of early marriage and over-reliance on foreign funding.

Under the theme “Fast Track To End AIDS: Get Tested for HIV”, the event was facilitated by NAS and its development partners including NETHIPS, Youth Coordinating Agency, Dignity Association, Program Development Specialist, Milton Margai College of Education and Technology, the Independent Media Commission and the Human Rights Commission of Sierra Leone.

The partners recommended there is need to increase the long-term needs for HIV prevention, invest in treatment for women, men and children. They also called for anti-natal treatment, in order to avoid children from being born with AIDS. The partners appealed to the Government of Sierra Leone, to equip a vocational institute in Grafton. They shared plans to help improve youthful health talk shows, counseling and youth disability projects; which they say can collectively contribute to this year’s theme.

The Vice Principal of MMCETT, Mrs. Peacock, informed her audience that the college has trained 200 counselors all over Sierra Leone. She pleaded for an increase in salary; emphasizing on education as a social vaccine.

HIV patient Musu Jimmy said people living with HIV must live a normal life. She complained about drugs drop out and said they are mostly faced with embarrassment at drug sites. She implored the government and partners to renew AIDS sensitization and vigorously urged citizens to get tested for HIV. She also said as a country, we must fast track in joining hands with the world in ending the epidemic.

The Commissioner for IMC, Francis Sowa, said the media is responsible for fast tracking approach towards aiding the HIV epidemic. He said the media provides a platform for change and plays a critical role in bringing information to help promote the agenda.