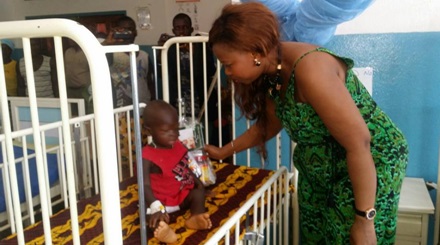 In separate visits to the three hospitals, the co-founder of the Maada and Fatima Bio Foundation, Mrs Fatima Bio commended the doctors, matrons and nurses of the hospitals for their care and support to the children. Mrs Fatima Bio also thanked the parents who were in attendance during the distribution of the Christmas gifts and wished their children speedy recovery.

Also as part of efforts by the Maada and Fatima Bio Foundation to encourage pregnant women to always go to hospitals for safe delivery, Mrs. Fatima Bio pledged in each of the hospitals that any child born on the 1st January 2016 in any of the three hospitals will receive a modest token from her.

Mrs Fatima Bio was also accompanied by the 2012 Vice Presidential Candidate of the Sierra Leone People’s Party, Dr. Kadie Sesay who thanked the management and staff at the three hospitals for receiving them and the distribution. The distribution of the Christmas gifts to the children at the hospitals was done by Mrs. Fatima Bio and members of her entourage which included the Secretary of the Foundation, Mr. Brima Katta, Honourable Dixon Rogers, members of the Julius Maada Bio Women’s Wing (UK) amongst others.