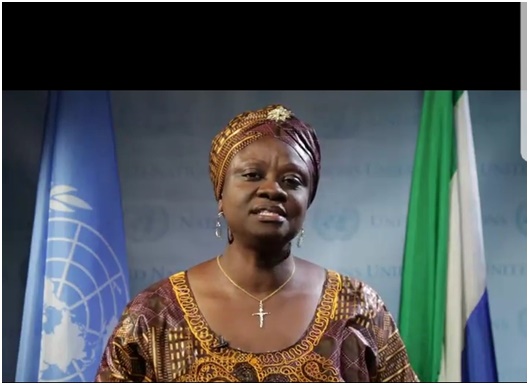 She was speaking on the Day of the African Child. Indeed, Sierra Leoneans in every corner of the country; in every chiefdom of all districts and in all cities, woke up early in the morning of Friday June 16 2017 by 7am to the sweet, lovely voice of Hon. Dr. Sylvia Olayinka Blyden, being played over their radios and television sets as she addressed the Children of Sierra Leone in the annual minister’s 5 minutes Pep Talk to mark June 16th, the Day of the African Child.

This year, the Hon. Minister was out of the country but the broadcast was recorded from the U.N. Studios in New York by courtesy of Mr. Kingsley Lington and Mr. Ben Dotsei Malor of the United Nations.

It was then sent down to Sierra Leone by high speed internet in the night to all MSWGCA offices around the country. The efficiency of the private staff of Minister Blyden plus the dedicated provincial Staff of MSWGCA ensured that by 7am that next morning, the recording was being aired on all community radios and all the major TV stations. It was well received and became the highlight of the morning discussion on many local TV and Radio media programs.

According to a news dispatch, Sierra Leone appreciates the collaboration that has made it possible for the Children in every corner of the country to hear the words of their Honourable Minister whose 5 minutes Pep Talk theme this year was to advise children to stay away from being used by unscrupulous adults as we approach 2018 Elections as well as to inspire the Girl Child to have confidence that rights of girls will always be protected until they turn 18 years of age.

The video was also shared widely on the social media by friends and admirers of Hon. Minister Blyden. The Cabinet Minister has since returned back to Sierra Leone over the weekend.