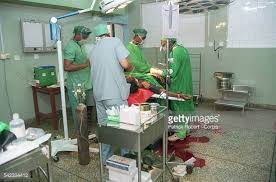 As a way of providing affordable and quality health care services for hundreds of deprived persons living with hernia, a philanthropist by the name of Dr Roland Turay has supported the successful conduct of hernia patients on 200 patients at Masangha Hospital, Tonkolili District.

The patients were drawn from over 46 communities in Bombali and Tonkolili Districts.

Commenting on the free surgical operation, Dr. Roland Turay explained that health education and agricultural supports to vulnerable communities came about as the result of a survey he conducted, while he was doing thesis in Business Administration in 2014/2015.

Upon completion, he said he identified a huge gap in Sierra Leone’s heath sector, education and agricultural practices in various communities, hence the initiative.

Commenting further Dr. Turay asserted that as an elderly stateman he saw the need to assist the patients, added that he would not keep his money and allow his fellow Sierra Leoneans perished from curable diseases like hernia

The 200 patients were also provided with food support and transportation, while they were admitted at the hospital.

Hassan Thullah is a beneficiary and he expressed happiness over the free and quality health services offered them.

‘I have lived with the health complication for several years, but Dr Turay’s intervention has brought me relief once more’, he said.

The national coordinator Masangha Surgical Health Care, Samuel Mathew Conteh thanked Dr Turay for the gesture, stressing that he was among few Sierra Leoneans that could sacrifice so much resources for the needy free of charge.

Dr. Roland Turay’s intervention is not only limited to health promotion, but he has also chipped into boosting agriculture and education in Bombali Serry and Makeni.

On agriculture, he said he has cultivated 10,000 pineapple stems, 10 acres of potato and 100 acres of upland rice at Makumkuba and Mankneh communities.

According to him, the essence of agricultural supports to his people was aimed at reducing food insecurity among vulnerable communities that could not afford to feed themselves.

He reiterated his continuous support to education and health as he is currently working on two projects for the establishment of a modern hospital with an advanced technical vocation institute in his chiefdom.