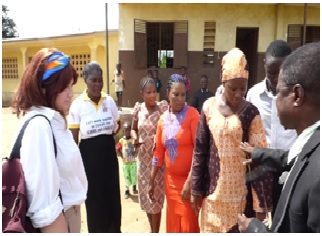 She said her father has been taking photographs of deplorable scenes of schools and pupils in that part of the country and whenever she watches those photos she became uncomfortable and eager to render her support towards developing these schools and their pupils.

She said since then she started thinking of how to come to Sierra Leone and give support her colleague children and now she had come to provide learning materials for them.

Speaking to AYV newspaper, after the donation ceremony, Oliver Castagne, father of Blanche who doubles as Director of Ceres African Development said his daughter has always been passionate about women affairs and children’s welfare.

Appreciating the gesture, Hassan Mansaray, Head Teacher R.E.C Primary School Brama Village said they were happy for the support as according to him, schools in that part of the country are constraints with getting school materials and learning equipment.

He said there has been limited availability of supply of these materials, adding that this has been one of the leading causes of poor educational performances from children in that part of the country.

Mr. Mansaray appealed to Blanche and the Foundation to continue supporting their schools and pupils.