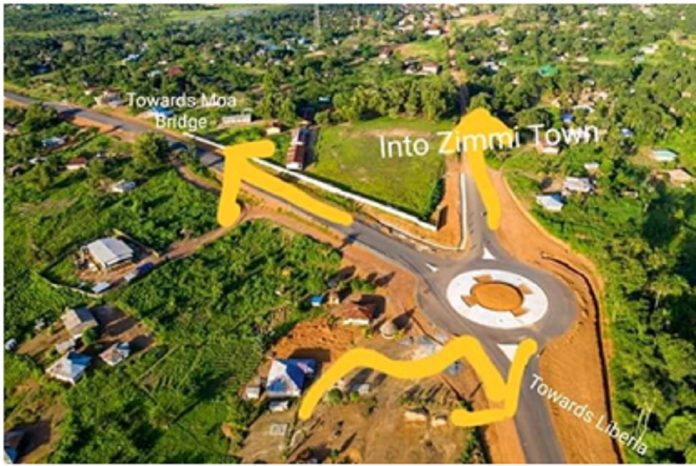 Stakeholders of Pujehun district have commended the leadership of government on progress made on road construction projects in the district. The commendation was made when President Julius Maada Bio visited the district on a Thank You Tour.

While expressing their gratitude to President Bio for embarking on several development projects in the District, speaker after speaker mentioned the construction roads as key among the development projects that are easing the burden on its residents by revamping economic activities, beautifying the district and attracting more touristic attention to the district.

Speaking at a welcome event held in ZimmiMakpele, the Chairman of Pujehun District Council, Sheik Suaibu Sowa thanked President Bio and the management of the Sierra Leone Roads Authority (SLRA) for speeding up the construction of roads in the district. He recalled that “the movement of people and goods had been previously challenged by the poor road networks in the district.”

Apart from the major road constructions, Mr. Sowa revealed that Government had launched another six lots of feeder roads to enhance access to remote communities in the district.

Pujehun District is located in the South of Sierra Leone, and shares boundaries with the East and neighbouring Liberia. It has over 40 thousand inhabitants, who are mostly engaged in farming and trade. There are ongoing road construction projects such as the Bo-Bandajuma road, a 103km road from Bandajuma to Liberia border, and a 25km road from Bandajuma to Pujehun Town in the district.

Addressing the people of Pujehun District, President Julius Maada Bio stated that his government would soon commence the construction of the Zimmi-Kenema Road to ease the movement of people and goods in the two districts. “Apart from that, I have made arrangements for the construction of a 5km road in Zimmi Town to reduce the dust particles that my pupils inhale on their ways to school,” he revealed.

The two major roads – Bo-Bandajuma and Bandajuma-Liberia Border – are funded by the European Union and the Islamic Development Bank with counterpart funding from the Government of Sierra Leone. The construction activities are supervised by SLRA. Upon completion, the roads will connect Pujehun District to the wider South, East and neighbouring Liberia.