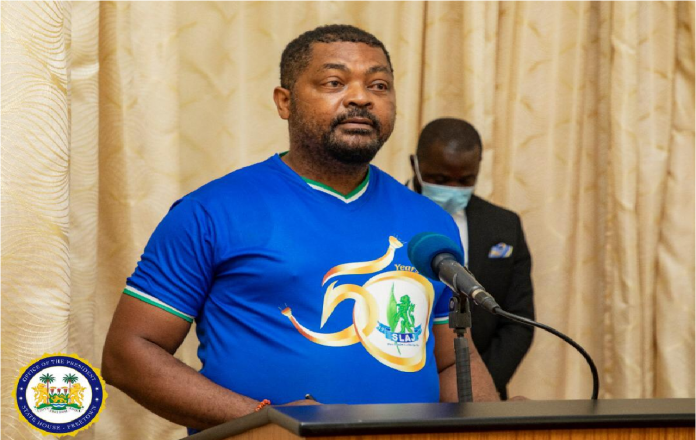 Your Excellency, let me start by expressing our disappointment that you were not able to attend our Golden Jubilee AGM 2021 in Bo City to receive your press freedom award in person.

We had wanted the whole national and regional executives, as well as the entire membership of SLAJ, to physically join in expressing our profound thanks and appreciation for the repeal of the criminal libel laws.

We wanted to demonstrate in our own special way our grateful thanks so that you can also join in feeling that sense of freedom, which only those who have been to jail can relate to. For it is when you have been locked up and then released that you can fully appreciate what freedom means and how valuable it is for that fundamental human right to be respected and protected.

Nevertheless, the fact that you sent the very high ranking Chief Minister to represent you, backed by your trusted Information Minister and your dependable Press Secretary, to receive the award on your behalf, indicated to us that you must have had other pressing state matters to attend to.

Your Excellency, all Presidents and Junta Heads of State we have had in this country, including your very self, have jailed journalists using the Criminal and Seditious Libel Law, but none was brave enough to repeal the law.

This was a law that shackled the Sierra Leone media and journalists for 55 odd years.

This law flourished under post-Independence Sierra Leone, a prolonged One Party system, and multi-party democracy.

This law was used 99% by successive governments and politicians to cower the media, and intimidate and incarcerate journalists to escape being held to account and to clamp down on dissenting views.

This law prevented women from coming into the journalism profession and aspire for leadership positions in the media industry.

This law prevented private sector investment in the media, rendering the industry poor.

We know what this law did to some of our finest senior colleagues: Paul Kamara, David Tam Baryoh, Philip Neville, Jonathan Leigh and Bai Bai Sesay to name but just a few. Paul Kamara was incarcerated in solitary confinement, and he was never the same Paul we knew when he was released a couple of years later.

Our young colleagues were also not spared: Sam Lahai and Sallieu Tejan Jalloh, as examples.

This was a law SLAJ has fought for more than four decades to be expunged from our law books. We organised peaceful demonstrations, panel discussions, we challenged it at the Supreme Court, we pleaded and dialogued with the authorities concerned without success.

And then you came along and promised in your manifesto that you would repeal the law if you were elected President of the Republic.

Your Excellency, every journey, no matter how long, will one day come to an end. And so last year, 2020, we witnessed the historic repeal of the obnoxious law, ushering a new dawn for not only the media in Sierra Leone but for every citizen in the area of freedom of expression and of the press.

And the timing of the repeal could not have come at a better time than a year to our 50th Anniversary as a professional Association dedicated to promoting and defending freedom of expression and of the press.

Therefore, at our just concluded Golden Jubilee AGM 2021 held in Bo city, we recognized the contribution of all stakeholders toward this success, from civil society, the international community, and the Parliament of Sierra Leone to our own members including foundation members and past presidents, both dead and alive.

Your Excellency you will recall that during your symbolic signing of the repeal document at the conference room of State House here in October 2020, I made a promise in my statement that SLAJ would give you a befitting honour for fulfilling your manifesto promise of repealing the Criminal Libel Law. If you as our President, promised and delivered, we also have a moral obligation to fulfill our promise to you. And that is exactly what this award is all about.

Meanwhile, your Excellency, in a meeting like this it is but necessary that we, as the Fourth Estate, remind the Government of its obligation to the people of this country, to provide basic services and ensure equal opportunities for every Sierra Leonean regardless of political party, region, tribe, class, gender, and social and physical status.

SLAJ will continue to play its sacred role of holding government to account, and our partnership and collaboration should not be seen to undermine that.

Gone are the days when SLAJ conducts itself as an anti-government body, rather we now see ourselves as partners; not partners in wrongdoing but in promoting good governance, accountability, peace and stability, and development initiatives for the common good.

Mr President even as we continue to thank and appreciate you, we are still praying that you will sum up the courage to transform the old Daily Mail building to a befitting secretariat for SLAJ.

We know, and have seen you do what we thought was impossible, so we are confident that asking for something as small as the Daily Mail building is within your means and you can do it.

Finally, your Excellency, let me on behalf of the entire membership of SLAJ make two presentations to you:

1. Is a SLAJ Publication on the Impact of COVID-19 on journalism in Sierra Leone. This book, a product of a partnership between SLAJ and Bournemouth University in the UK, will help government understand the impact of COVID on the media sector and has recommendations for strengthening a disaster-prepared media to meet future challenges of our country’s vulnerability to natural disasters.

2. Is an award crowning you as Champion of Free Speech, for fulfilling your manifesto promise of repealing the Criminal Libel Law.

And as we make this final presentation, let me take this opportunity Mr. President, to remind you that this award comes with immense responsibility. As Champion of Free Speech, you must do all in your power to ensure that this country under your leadership does not pass any legislation that will take away the freedom and civic space we have achieved with the repeal of the criminal libel law.