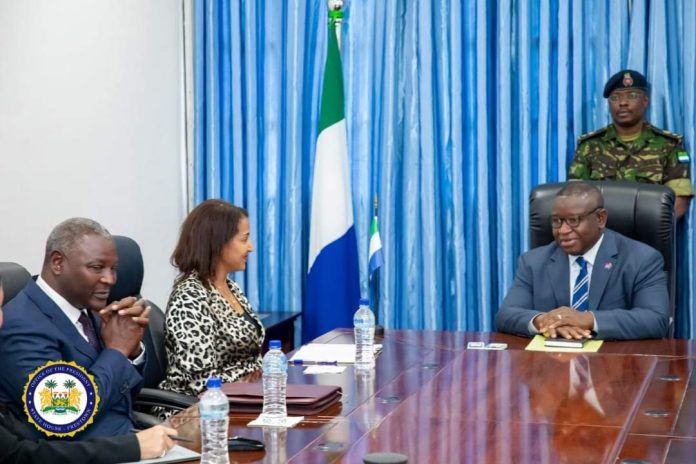 The Foundation’s Director, Professor Senait Fisseha, a globally recognised leader in reproductive health and rights and a lifelong gender champion, said on behalf of her team they were pleased to visit, stating that they had already met and visited a lot of health centers and facilities and engaged health practitioners.

The Professor, who currently oversees the Foundation’s international grantmaking to advance women’s health and rights globally, also serves as the Chief Adviser to the Director-General of the World Health Organisation.

The Chief Executive Officer for Equity Group Holdings, Dr James Mwangi, a career banker with a bias in inclusive finance, said they were grateful for the government’s extension of an invitation to them, citing the many very fruitful interactive meetings they had already had with government ministers.

President Dr Julius Maada Bio formerly welcomed Professor Fisseha, Dr Mwangi and their teams to Sierra Leone, adding that he was looking forward to working with them on behalf of the state.

“We are fully prepared as a nation and as a government to work with all private-sector partners. We are a country that is ambitious in its development strides and eager to move forward. That is the reason we identify human capital as the basis for sustainable development.

“Sierra Leone is associated with all kinds of natural resources, but as a government, I focus on my people as the most valuable resource to invest in. This is why I chose human capital development,” he said.

The President further expressed how excited he was about the banking method of Equity Group, which started from the provinces in Kenya and later extended to the capital, noting that: “The interest and concern for the social wellbeing of the people, as demonstrated by the Equity Bank in East Africa, is laudable”.