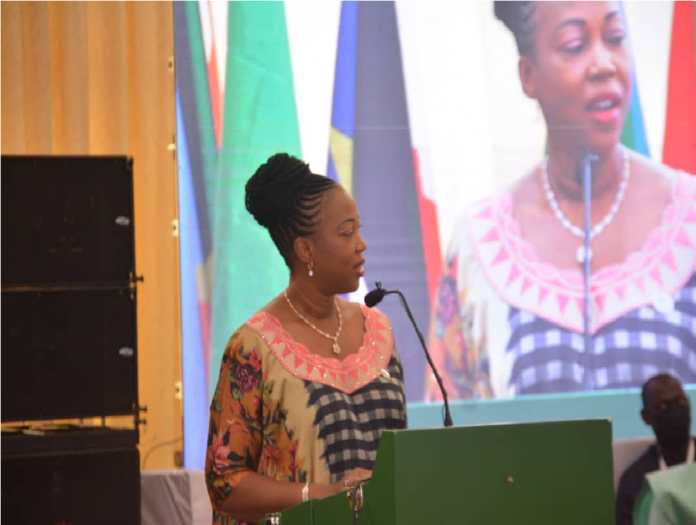 Speaking at the 9th General Assembly of Africa First Ladies Peace Mission (AFLPM), the Sierra Leone First Lady wowed the crowd as she nailed the issues with her usual frank and open delivery. Speaking on the theme of regional and continental Peace, Mrs. Bio underscored the need for unity in Africa, and noted that women and Children who are mostly affected during conflicts have critical roles to play in making peace and stability possible.

Mrs. Bio pointed out that the organization ‘Africa First Ladies Peace Mission (AFLPM)’, is a very important body and went on to  commend the First Lady of Nigeria Mrs. Aisha Buhari for her hardwork in reactivating the AFLPM, in order for them to contribute to the peace making and peace building processes in Africa.

“The First Ladies are not voted for but if our husbands fail to do the right things, their action will directly affect us”, Mrs Fatima Maada Bio stated.

She called on all First Ladies to be strong and be supportive of the agenda of their husbands which she described as “the people’s agenda”.

The indefatigable and eloquent First Lady then delved into history, praising the people and the Federal Government of Nigeria for their sacrificial role played in contributing to the peace process in Sierra Leone.

This was a very eloquent and warm delivery which received a standing ovation from all conference participants present at the venue.

The AFLPM was founded in 1997 as an umbrella organisation of wives of African Heads of State to assist the African Union, regional organizations, and national governments in fostering peace and reducing conflict and the effects of conflict on the African continent.

First Lady Mrs. Fatima Bio is now on her way back to Sierra Leone after a stellar performance in the Federal Republic of Nigeria during which she added another gloss to the rapidly improving image of Sierra Leone.