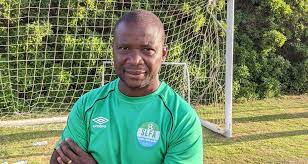 By Mohamed Fajah Barrie in Douala

The group E match at the Japoma stadium in Douala finished goalless to the surprise of book makers who had written-off Leone Stars before the encounter.

“I want to say well done to everyone,” said Coach Keister during the post-match press conference.

“We knew it’s going to be different playing against the champions in Africa. We had a game plan and we stick to it,”

“As a nation we’re in a transition and we’ve now set the benchmark.”

“We want to be at the Africa cup of Nations every two years. We’ve put together a group of boys blend with a few experienced players.

“We wanted to be competitive and it’s the direction we want to go.”

Coach Keister acknowledged Kamara’s remarkable performance but gave credit to all his players saying that the East End Lions goalkeeper had a good game but it was teamwork and the general performance of the team that saw them through.

Leone Stars’ next match is against Ivory Coast on Sunday. Already the team have started preparing as they had a light loosening up training session at the back of their hotel in Douala on Wednesday morning.