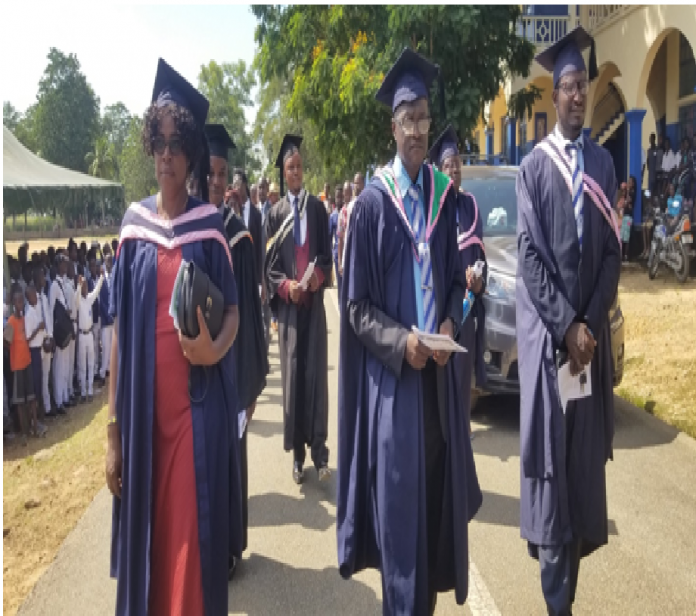 The Alumni Association of Christ The King College has held their annual speech day and prize giving ceremony in Bo City. This marks the 68th anniversary event and it is done to recognize and reward excellence for 2020/2021 school year.

Mostly importantly, teaches and pupils whose annual performance hit excellence are recognized and giving rewards, about one hundred prizes were given to both staff and pupils for excelling in different disciplines during this year’s event

The school he said was founded in 1954 and was built on a solid foundation of success, a legacy he pleaded to everyone to maintain.

The establishment of CKC he said was a landmark and historic event in the country. He called the school the game changer for it pivotal role in the transformation of education in the nation

This year’s event was purely sponsored by cobians led by United Kingdom branch. During an online interview via whatsapp with the chairman UK Chapter, he revealed that their sponsorship and commitment is to help CKC reclaimed their past glory where it was celebrated nationally and internationally.

The awards and prizes he added that are meant to intensify and provoke hard work and positive competition among teachers and pupils which was what motivated them to sponsor the event.

The keynote speaker of the occasion Hon. Dr. Austin Demby the minister of health and sanitation addressed the current pupils that they have free quality education and internet facility at their advantage to project academic excellence in the school as it used to be when these facilities were not available

He advised they against drug abuse

The principal of the senior school Edward Koroma made a special appeal for additional classrooms for the senior secondary school and perimeter fencing of the 34 acres of school land.