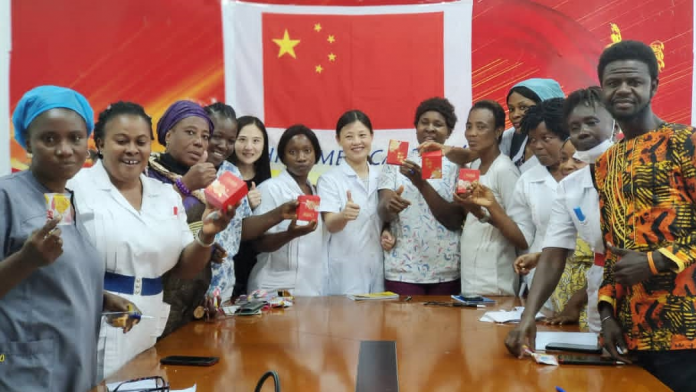 Head of the 23rd batch of the Chinese Medical Team, Dr. Zhou Xi, engaged medical staff of the Emergency Department and the Department of Obstetrics and Gynecology of the Sierra Leone – China Friendship Hospital on September 9, 2022.

Dr. Zhou’s special lecture on ectopic pregnancy was commended by her audience, including the Medical Superintendent of the Hospital, Dr. Karim Kabineh was widely acclaimed as not only educative but a stepping stone in enhancing quality work in the department.

Ectopic pregnancy is a pregnancy in which the fertilized egg implants outside the uterus. The fertilized egg can’t survive outside the uterus. If left to grow, it may damage nearby organs and cause life-threatening loss of blood. Symptoms include pelvic pain and vaginal bleeding. To prevent complications, treatment is required. In the early stages, medication may be sufficient. Later stages require surgery.

“Delayed treatment may lead to life-threatening in patients,” Dr. Zhou said and added that in Africa, where there is a shortage of medicine, it is important to teach local healthcare workers how to make rapid diagnoses and treatment.

The origin of the Mid-Autumn is related to agricultural production. Mid-Autumn Festival is in August, on this day, various fruits and crops have matured. In order to celebrate the harvest and express feelings of joy, the farmers named the “Mid-Autumn Festival” as a holiday.

According to legend, in ancient times a year, ten suns appeared in the sky, straight smoke-roasted earth; the sea dry people no longer saw the life go. This alerted a hero named Hou Yi, he boarded the Kunlun Peak, transported enough god, God opened the bow and shot down nine stretches of an excess of sun. Hou Yi set matchless magic; the people respected and loved by many patriots come here Toushi apprenticeship.

Dr. Zhou is the Team Leader of the Chinese Medical Team, Deputy Director Doctor, and Professor of Gynecology of the First Affiliated Hospital of South of China University, Hengyang City – Hunan Province, China.