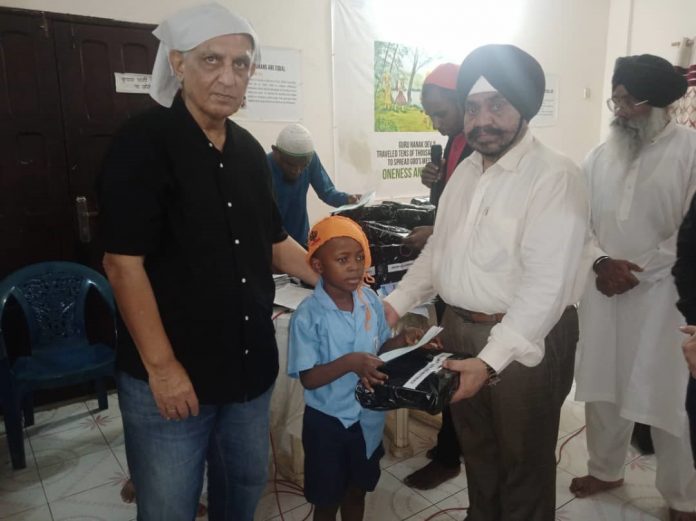 Shri Gurudwara Sahib Sierra Leone limited over the weekend awarded its first Baba Guru Nanak Scholarship Package to over twenty-eight private schools and over sixty pupils within the Lumley community and its environs.

Delivering the keynote address to the beneficiaries and their parents at the conference room of Jetty Trading in Lumley, Head of the Scholarship Package, Mohinder Bir Singh Sachdeva, who also doubles as CEO of Jetty Trading Company, said the scholarship targets over 60 pupils from over 28 private schools within the Lumley community and its environs.

According to him, since June 2017 when he started business in Lumley, he has been aiming to give back to the community from the small profit he makes.

He said coming from the Sikh religion in Indian, they believe in the 3 guiding principles which includes: “Always remember God throughout the day; earn your livelihood through hard work and by honest means; and to selflessly serve and share with others especially with those less fortunate than yourself.

This according to Mr. Sachdeva is what initiated the scholarship.

He said during their daily and weekly worships in their Temple, worshippers give offering and it is from those offerings that supports come to help the needy.

He recalled that through the Baba Guru Nanak package, Shri Gurudwara Sahib Sierra Leone limited has been giving several humanitarian helps to the needy, listing food and drink supplies to underprivileged and needy people including security forces, students, community people and many more, during the heat of COVID-19, lockdowns and other challenging times as some of their services.

Currently, Mr. Sachdeva further revealed, he supported and funded the medical bills for a sick baby, the refurbishment of a primary school in Lumley, coupled with weekend preparation and supplying of delicious food packs to people in Lumley and nearby communities. He said his aim to be spending 50 million leones and more on the Baba Guru Nanak Scholarship to school pupils.

He said the scholarship package entails paying of school fees, supply of exercise books and assorted school materials to each selected pupil.

A senior member of the Sikhism Temple, the world’s fifth-largest religion, Harkishin Balani comment on their work to help people in times of need, citing sending sick children overseas for medical and helping the needy as some of the major services they have been offering.

He said the best gift one can give a human being is education. He used the meeting as an opportunity to admonished parents to monitor their children’s educational work and guide them where necessary so as to build a wonder future.

One of the facilitators of the Baba Guru Nanak Scholarship is Abdulai Bah, journalist and presenter Voice of Islam Radio. He said the beneficiaries were carefully selected within deprived communities within Lumley and its environs.

He said for safer reasons, the school fees will not be given in physical cash to beneficiaries but paid directly to their school either by provided school bank accounts or to the schools directly.

Abdulai went on that the Baba Guru Nanak Scholarship is targeting pupils in private schools because government is already running free school charges in government schools.

Yusuf Samura is a parent to one of the beneficiary pupils. He thanked the Shri Gurudwara Sahib Sierra Leone limited for bring the Baba Guru Nanak Scholarship package and for incorporating his child and other needy children in the community.

He assured the scholarship donors that as parent, he will monitor to ensure his child focus in his academic, while calling on colleague parents to do same.

A pupil beneficiary, Isha Kanu thanked Shri Gurudwara Sahib Sierra Leone limited for the Baba Guru Nanak Scholarship package. She admonished colleague pupils to do well in their academic work so they will continue benefiting.

The event attracted other distinguished members of the Sikhism Temple including Devraj Budnwani, Sachin Ganglani, Rajinder and Manoj, who also made meaningful contributions to the scholarship.

The Sikh religion is one of the youngest world religions and was founded more than 500 years ago (1469) in Punjab, North India, by Guru Nanak Dev Ji, in response to a spiritual revelation. Nanak and his nine successors are known as ‘gurus’, which is a term for a spiritual guide or teacher.

Guru Nanak taught true religion consists of always being mindful of God, meditating on name and attributes of God and reflecting on God’s Power in all activities of daily life. Guru Nanak’s followers became known as Sikhs (from the Sanskrit word shishysa), which means disciple. The Holy Book, the “Guru Granth Sahib”, is the ultimate spiritual authority for Sikhs. It contains the teachings and devotional compositions written and recorded by the Sikh Gurus and some contemporary Hindu and Muslim saints. The Guru Granth Sahib is at the heart of Sikh worship and its presence lends sanctity to the Sikh place of worship, the Gurdwara.

Sikhism is the world’s fifth-largest religion. The word ‘Sikh’ means ‘learner’ or ‘seeker of truth’. Sikhism advocates equality, social justice and service to humanity, and tolerance for other religions.