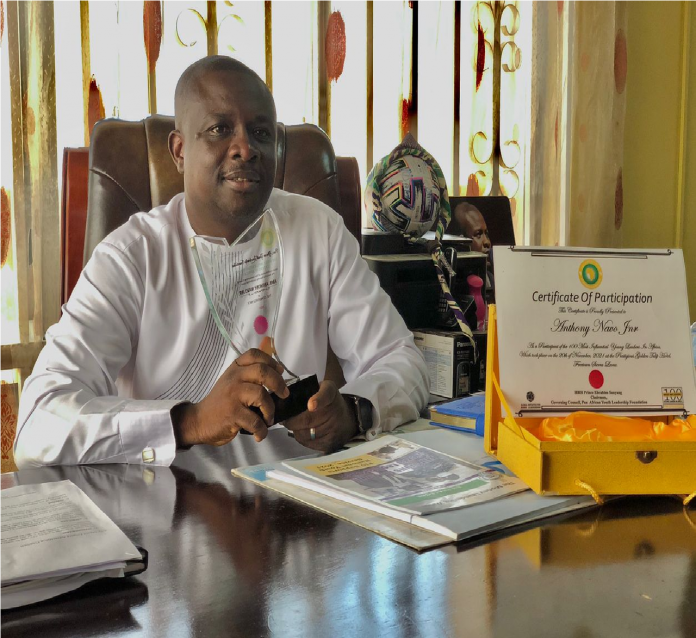 The Pan-African Youth Leadership Foundation Awards over the weekend honored the President, CEO and Founder of the Africa Young Voices (AYV) Media Empire, Ambassador Anthony Navo Jr. as one of Africa’s 100 Most Influential Young Leaders.

The fine young president was honored for his outstanding and valuable contributions to the development of Sierra Leone, especially in the area of young people’s growth and development and the improvement and transformation of the country’s media landscape.

Receiving the Award on behalf of Ambassador Anthony Navo Jr. who was unavoidably absent, his abled-bodied women soldier, General Manager of AYV Media Empire, Josephine Tucker thanked the organisers for the confidence and recognition on her boss in awarding him the prestigious award in line with other prominent Africans.

She said young people should emulate the footsteps of Ambassador Navo Jr., working towards improving lives of young people.

Keynote speaker at the event was Minister of Tourism and Cultural Affairs, Memunatu Pratt. She talked on the Role of Young People in Africa we want to see.

She said young people constitute a greater part of the African population and that they must ensure to be good and law-abiding citizens involve in volunteerism and give their energy to work done in their communities or wherever they find themselves.

According to her, leadership starts with responsibility and with their involvement in engaging others to be empowered then they can fast forward to Africa we want to see.

Sierra Leone’s Anti-Corruption Commissioner, Francis Ben Kaifala, also honored as one of Africa’s 100 Most Influential Young Leaders said if there has to be transformative progress in Africa, it has to be driven by Africans.

He said there is too much focus on political leaders but leadership goes beyond politics, adding that young people must have the drive to lead in whatever position they find themselves in.

The Pan-African Youth Leadership Foundation Awards is an annual event conceived to give proper recognition through the conferment of awards of excellence and distinctions to young people who have made outstanding achievements in the year under consideration.

The Awards celebrate outstanding African Youth each year with over 200 influential business leaders, politicians, youth leaders, government ministers, innovators, entrepreneurs and other professionals from all walks of life.

At the Golden Tulip Hotel in Freetown, Executive Director for Pan African Youth Leadership Foundation, Salako Adebowale said the mission is to create a hub for interactions and idea dissemination amongst West African youths.

He thanked partners especially AYV Media Empire for broadcasting their events through its new DSTV channel.