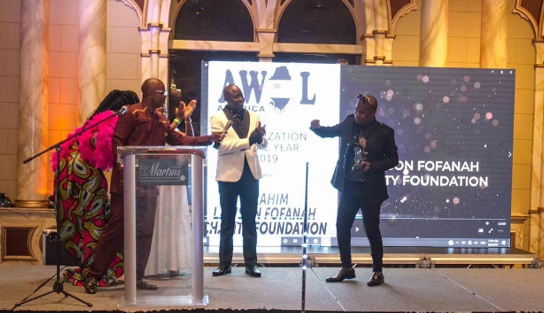 All Works of Life America (AWOL) has held its ‘AWOL America Achievement Awards 2022’ on Saturday 10th and Sunday 11th September, 2022 at the Martin’s Caterers Upper Marlboro, United States of America.

AWOL America is a charitable organisation with its membership drawn from among Sierra Leoneans from various callings of life such as lawyers, nurses, drivers, entrepreneurs, accountants, retail operatives and students among others who share common aspirations to genuinely and selflessly contribute to the development of Sierra Leone.

AWOL was founded in 2001 by a group of young Sierra Leoneans from various backgrounds. Initially, the group was mainly preoccupied with throwing parties to promote friendship through socializing and merry making. That was until Moseray Gibril Fadika (now late) became its Chairman several months later.

He quickly convinced his colleagues to forget about throwing parties and instead use such funds to give back to deprive communities and complement the effort of the Government of Sierra Leone in nation building.

That same year AWOL was registered as a community-based organisation and subsequently officially launched at a grand ceremony at the British Council Hall, Tower Hill, Freetown by the then President of the Republic of Sierra Leone, Dr. Ahmed Texan Kabbah (late).

The following year Mr. Fadika introduced the annual National Achievement Awards (NAA) as a way to identify role models in society to whom the younger generation could aspire.

The NAA also aimed to promote excellence, hard work and diligence in public, as well as private, service.

Clarifying the ‘Works’ in AWOL The word ‘Works’ in the organisation’s name is a deliberate decision to move away from the over-used cliché: ‘All walks of life,’ but it also represents various vocations of life as characterized by our diverse and inclusive.

AWOLAMERICA was part of the project for the construction of a community school in Gondama town, Tikonko chiefdom, Bo district in Southern Sierra Leone.

It is important to mention that AWOL aims to fund the Gondama School project squarely. Many perceived Gondama Town and its environs as abandoned and neglected communities that once hosted refugees from Liberia and internally displaced persons.

This project was the first in the history of Sierra Leone for a local charity to undertake such a project.