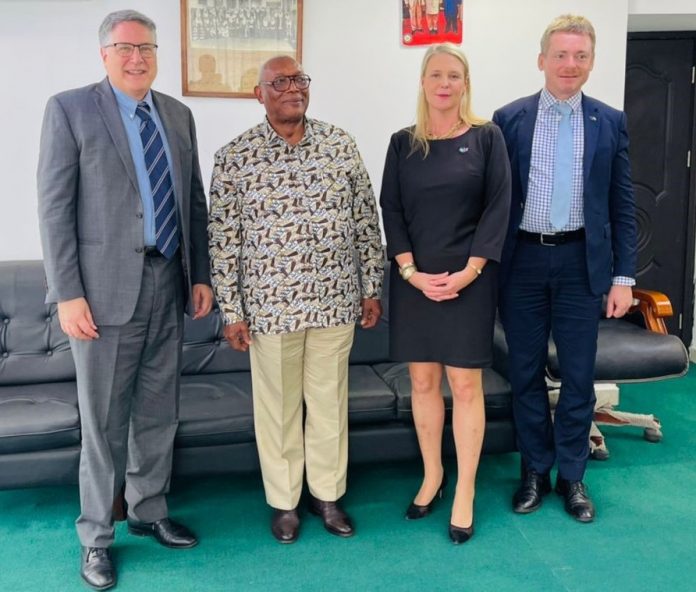 The diplomats had high-level engagements with the Speaker of Parliament and discussed wide range of issues relating to the recent violent demonstrations on 10th August 2022, the 2023 electoral processes, and other related matters.

Making his submission, Ambassador David Reimer said their visit was important to the Speaker of Parliament as they were in his office to discuss and chart the way forward relating to the recent violent demonstrations that resulted in the loss of lives and property, and other matters connected therewith to good governance and democracy in Sierra Leone.

During their deliberations, the US Ambassador reiterated that any form of electoral process has to purely come from the Government of Sierra Leone.

On the August 10th violent demonstrations, the US Ambassador said citizens have the right to demonstrate peacefully and not violently and went on to ask what would be the role of the International Community in providing support to the government in the promotion of peace and stability in the country.

Relating to messages against violence, the Ambassador suggested that MPs were to sign and subscribe to the “no violence campaign”, currently taking place in the country.

David Reimer also noted that they would be very helpful whenever they were called upon to address issues affecting democracy.

The British High Commissioner, Lisa Chesney said the constitutional rights of the citizens are paramount to the development of a State and expressed concerns over misinformation on social media.

The High Commissioner requested the Speaker to throw light on the District Block System of election and the boundary delimitation process.

Manuel Muller, EU Ambassador requested the opinion of the Speaker on the democratic process of the country, and regarded Sierra Leone as a peace-loving country. He asked what would be the way forward for peace and stability in the country.

Responding, the Speaker of Parliament, Hon. Dr. Abass Chernor Bundu appreciated their visit and informed them that currently Parliament was in recess.

He reaffirmed the Government’s commitments to the upholding peace and democracy in the country and underscored the tremendous strides the Parliament had undertaken so far in the promotion of good governance and democracy in Sierra Leone.

He highlighted the work of the Parliament in light of legislations relative to the electioneering process through the enactment of the Public Elections Act of 2022.

The Speaker emphasised that the use of the PR system would help to minimise financial burden on the State and noted that, the boundary delimitation process would only take place, after the completion of voters’ registration process in the country.

Responding to the question on polarisation, he said coming to any electioneering process tensions would always flare up.

On the incident on 10th August 2022, he said he believed for any form of demonstrations to take place, the dictates of the Constitution must be followed strictly.

“The people have rights to demonstrate but they should do so within the confines of the laws of the country”, he asserted.

The Speaker said he would love to see where a group of people will write the police for permission to demonstrate and give the police all details and in return the police help them to process after an approval has been given lawfully by the police.

Responding to the immunities of MPs, the Speaker said to every right there is also a responsibility as prescribed in the 1991 Constitution of Sierra Leone.

Reflecting on the violent protests, Dr. Bundu said democracy and violence could work together and called on International Partners to convey messages of non-violence to the leadership of all registered Political Parties in the country and implored them to match words with their actions.

Concluding, the Speaker said it would be a good idea for MPs to sign up against non-violence messages but reiterated that MPs had their leadership outside Parliament which is making it difficult.

“The leadership of political parties outside Parliament has to be engaged on the need for the maintenance of peace and security in the democratic dispensation of Sierra Leone”, he remarked.