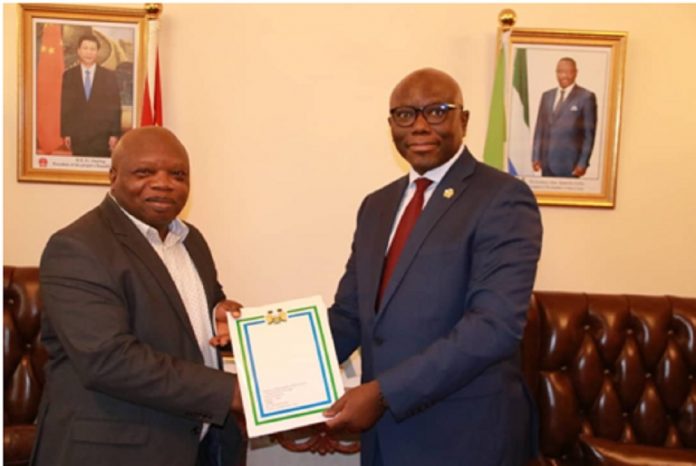 Making his statement at the Embassy Hall where diplomatic and local staff had earlier converged, Ambassador Ndomahina reiterated Presidential stance on the fight against corruption.

The Ambassador continuously quoted President Bio that corruption had been an impediment to national development and that Government is well determined to change the narrative.

He went on to say that due to determined leadership, the New Direction Government has been able to clamp down on corrupt practices thereby recovering lot of stolen monies by corrupt individuals.

The Ambassador affirmed his belief in the leadership of President Bio and his unflinching support to the fight against corruption, adding that the President is rightfully directing all stolen monies into providing quality health care services to Sierra Leoneans.

Addressing the ACC team, Ambassador Ndomahina observed that the Commission’s statistics on the fight against corruption were starling. ‘The Millennium Challenge Corporation (MCC) Scorecard of the United States Government had progressed from a percentage score of 49 in 2017 to 81 percent in 2020’, Ambassador Ndomahina asserted. He added that such an achievement since the creation of the MCC in 2004 has rendered Sierra Leone compact eligible for the first time in the history of the Country.

Ambassador Ndomahina concluded that the ACC had been able to reach such an appreciable level because over the years, the commission had heightened its public education and outreach activities by the use of new media and community meetings, thereby calling on every Sierra Leonean to be an ambassador in the fight against corruption.

Responding, ACC Deputy Commissioner Augustine Foday Ngobie extended warm greetings from Commissioner Ben Kaifala to Ambassador Ndomahina and his entire staff of the Embassy. Deputy Commissioner Ngobie mentioned that though they take the lead, the support of the people is very crucial in the fight against corruption.

He went on to say that the present ACC administration was put in place in 2018 by President Bio. ‘It is true that ACC was created in 2000 but successes achieved so far by our administration far overweight those achieved since creation’, Deputy Commissioner Ngobie said, adding that today’s ACC can go anywhere and everywhere – land, air or sea.

‘This explains why we endured 21 days quarantine, 14 days in Guangzhou and seven days in Beijing’. He disclosed that Commissioner Ben Francis Kaifala has gone to all sixteen (16) chiefdoms in the Country.

Highlighting their main functions, Deputy Commissioner Ngobie said that though the Anti-Corruption Commission has the mandate to investigate corruption related offences and prosecute corrupt individuals, their primary responsibility include public education, prevention and supervision of asset declaration by employees in grade seven and above.

Lamenting on the success achieved so far, the Deputy Commissioner said in the recent past three years the commission has recovered over Le30 billion, one hotel and two vehicles as corrupt proceeds.

He further stated that the commission has done reforms. For instance, there is a special court now in the high court to speedily adjudicate corruption cases. As a result, the conviction rate has increased up to 98% and trial period is now shortened.

He concluded that the ACC is determined to fight corruption and to make it unattractive.

While in Beijing, the ACC delegation may probably look into the issue of the undisclosed account that was reported by the Ambassador through Ministry of Foreign Affairs and International Cooperation, relating to the withdrawal of funds from a secret bank account with number 77835013642 opened and operated at the Bank of China in Beijing by the then Head of Chancery, Unisa Sahid Kamara within the period of 2014 – 2018.

The account was opened for donations purportedly derived in respect of the Ebola Epidemic that was ravaging Sierra Leone but over nine hundred and twenty-two thousand United States dollars ($922,000) was withdrawn on behalf of Government without documentation and diverted.