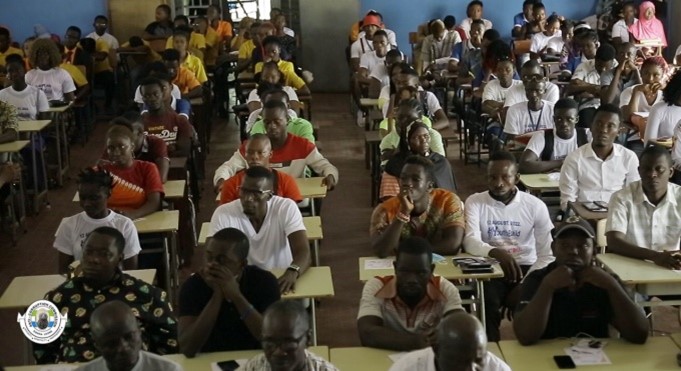 Commission of the Anti-Corruptions Commission (ACC), Francis Ben Kaifala over the weekend encouraged young people in Makeni to inculcate and own the principle of a South African word “Ubuntu”, meaning togetherness.

He was speaking in a well-attended youth gathering at the Ernest Bai Koroma University of Science and Technology (EBKUST) Auditorium in Makeni, where he was invited to deliver a keynote address on the International Day of Youths commemoration with the topic: “Youth Involvement in The Fight Against Corruption for The Attainment of Intergenerational Solidarity for The Creation of a World for All Ages.”

The ACC boss thanked Youth Build Sierra Leone for its contributions to national development by engaging in various community and people-centred activities like cleaning exercises, in a bid to keeping the environment clean and healthy.

Emphasising on the significance of the South African Principle of “Ubuntu” which preaches unity and the spirit of togetherness among people, Commissioner Kaifala further noted that Sierra Leoneans must believe in this saying also “I am, because we are” and I am, because you are”.

He called on the youths of Makeni to continue cultivating the spirit of unity in working together without recourse to regional, ethnic, partisan or other inclinations-we are all Sierra Leoneans.

In order to live together, there are certain values that we should hold constant, Francis Ben Kaifala observed, which are; Love, Respect, Acceptance, Sharing, Co-responsibility and Social Justice.

He furthered that we must imbibe a deep sense and culture of acceptance, as no one is responsible for being born a Fula, Mende, Kissi, Loko, Krio, Temne, Limba etc. I am called Francis. I was given that name by my parents because they are Catholic Christians. Did I have control over it? No, the commissioner underscored.

He admonished the youths that, “while we cannot change many things in our lives like the name one carries, the tribe they are born into and other  natural structures and geographies, we can stay together in peace with respect,  and progress, and that is the spirit of UBUNTU”.

While noting the sad happenings in the country on 10th August, 2022, which cost many lives including those of young people, Commissioner Kaifala pleaded with the youths to value themselves above the selfish tendencies of politicians which he said has always been to misuse them.

The commissioner registered his happiness for the youths of Youth Build Sierra Leone, whom he said has demonstrated that one does not need to be a Lawyer, an Accountant or Medical Doctor to succeed. The abilities and capacities he has seen demonstrated is adequate to enable young people succeed in life with the skills gained and acquired at Youth Build. We should not forget about the Middle manpower, Ben Kaifala noted. A lawyer would need a carpenter to fix his roof, a plumber to fix his pipes and an electrician to do his electrical fittings. So all these fields are very important and we need young people to fill this space, commissioner concluded.