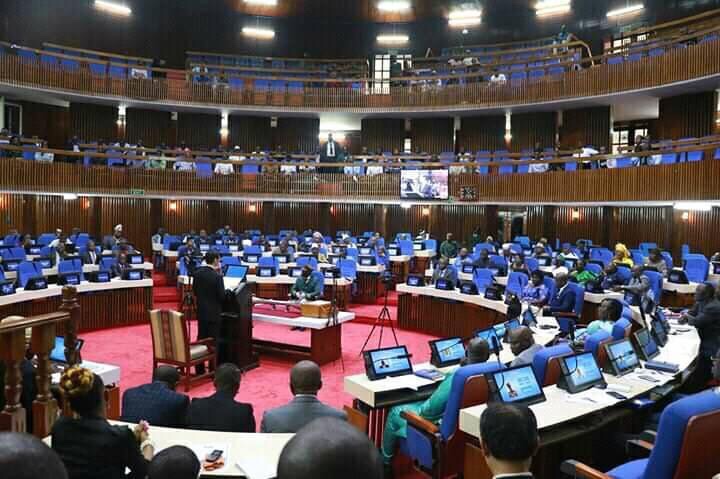 The Parliament of Sierra Leone has approved with unanimity, the Fifth Report of the Committee on Appointment and Public Service, chaired by the Acting Leader of Government Business, Hon. Bashiru Silikie.

The following presidential nominees were approved:

3. Mr. Sadiq Sillah- Ambassador to the Arab Republic of Egypt

Seconding the motion, the Whip of the Opposition Hon. Hassan Sesay said it was their duty to approve people nominated by President Bio. The MP zoomed out Retired Brigadier KES Boyah as former Member of Parliament with outstanding military experience. He recalled that, the nominee had strong human relationship with other people including political opponents, when he was in Parliament. “I commended him for that, but he never crossed to other party” he noted and went on to say that, the nominee is a man of integrity. He also commended other nominees including Mamusu Massaquoi, Hon Justice Ivan Sesay and Sadiq Sillah for their sound standings and other records. Trending on poetic device and rhetorical question, the Opposition Whip went on to decried Hon. Alhaji Alpha Bakarr Sahid Kanu for what he referred to as “Going with the wind” and warned President Bio to beware of the nominee. He used the opportunity to advise all the nominees to go and serve the nation positively.

Hon Sahr Jauna spoke well of all the nominees including Andrew Ansu Fatorma after pointing out the ONS Coordinator, Mr. caulker  for good work. According to the MP, the nominee’s appointment was not a mistake. He told colleague MPs that, the nominee has diligently served Sierra Leone especially ONS.

“Your appointment is received with blessings” he revealed and commended all the nominees.

Speaking on the debate, Hon. Abdul Karim Kamara said IsatuMoses from Kambia is well known for developing young people and encouraged her to go and set the pace in her new designation. According to the MP, Hon Alhaji Alhaji Alpha Bakarr Sahid Kanu was his mentor, but skillfully thanked and decried him.

An independent Member of Parliament from Pujehun, Hon Shaka Sama decried the immediate speaker for the disparaging statement he made against Hon Alpha Bakarr Sahid Kanu and admonished all and sundry to stop the hypocrisy. He advised the nominee to continue to be friendly and serve his country. “What Sierra Leone needed more is people with integrity” he stated and went on to thank President Bio for giving a fair share to Pujehun District, in light of appointment. He commended and cautioned all the nominees to prioritize field visits and not to rely on rumour.

Leader of C4C, Hon Saa Emerson Lamina described the set of nominees as hybrid of qualified people.  He said all the nominees had required qualifications and they were able to convince the Committee on Appointment and Public Service during the course of their interviews. He thanked Hon. Brigadier General KES Boyah for his appointment and spoke of his grassroots affiliation. He admonished Andrew Ansu Fatorma, to serve well in his new capacity. Similar piece of advice was giving to others. The Leader spoke well of Hon Alhaji Alpha Bakarr Sahid Kanu for transparency, integrity and encouraged him to promote national cohesion. “Avoid pulling downsyndrome” he advised.

President of the Female Caucus in Parliament, Hon Veronica Kadie Sesay said all the nominees were qualified for their various appointments and went on to thank President Bio for appointing more women to positions of trust. “We have wheelbarrow loaded with qualified women” she stated. She commended and advised all the nominees especially the women.

The MP referred to Hon Alhaji Alpha Bakarr Sahid Kanu as a liberal person, very positive and committed to national service. In light of national cohesion, she said the nominee was fit to man the new position.

While contributing to the debate, Hon P. C. Bai Kurr KanagbaroSanka Ill used the opportunity to say Leone Star had promoted more unity and national cohesion. “What the Leone Star has done, nobody has done it” he stated. The Hon PC outlined some of negative issues that had divided Sierra Leone. He urged all and sundry to fight against those issues. The Hon P.C encouraged the nominees to go and serve the nation. Recalling, the rebel war days, he thanked Retired Brigadier General KES Boyah for his military operations.

Hon. Francis Amara Kaisamba, while referencing the constitution said all the nominees were qualified and admonished them to work hard in their designated offices to promote the agenda of the President. He commended Hon. Retired Brigadier General KES Boyah for his appointment in tandem with, his experience and encouraged him to focus on development, security and unity. He advised the nominee for RMFA to serve well, in light of service delivery.  He gave similar piece of advice to the newly appointed Ambassador to Egypt Republic.

Hon. Mohamed Bangura whilst contributing to the debate, admonished colleague MPs to be mindful of their disparaging statement against others, especially, when they that are nominated for position of trust.  He said the opportunity and immunity they had as MPs would not last forever. He categorically stated that, Hon Alhaji Alpha Bakarr Sahid Kanu is a true member of the APC.

“I know he is a performer and that is why he has manned several positions in the country” he stated. Referencing nation cohesion and political tolerance, the MP informed that, he used to share TV podium with President Bio, when he was flagbearer and they are friends, he disclosed and went on to say,  “Does that make me SLPP?” He rhetorically asked. He emphatically informed that, the Hon. Alhaji Alpha Bakarr Sahid Kanu does not has barriers and also encouraged him to come back to his party three month prior to the 2023 Election.

Hon. Abdul Latif Sesay said the Hon Alhaji Alpha Bakarr Sahid Kanu is his cousin and is a top performer. According to him,,since the SLPP came to power, they had not been doing well and that is why they had borrowed the nominee from the APC. He admonished the nominee to work towards unity. He appealed to all nominees to work hard.

Hon.  Foday Marion Kamara called on colleague MPs to speedily approve the nominees. Spoke about his personal relationships with three of the nominees including Isatu Moses, Isata Abdulai and Hon Alhaji Alpha Bakarr Sahid. He informed that, the nominees are all good and urged them to deliver.

Contributing to the debate Hon Hindolo Moiwo Gevao spoke well about Hon Justice Ansumana Ivan Sesay for his service delivering at the justice sector. He also informed that, despite the innuendos, Hon Alhaji Alpha Bakarr Sahid Kanu is one of the finest Sierra Leoneans. He used the opportunity to appeal to all the nominees to give credence to unity as well as cohesion, relative to development.

The Independent Member of Parliament from Kailahun, Hon. Quinton Salia-Konneh spoke about national cohesion, in light of the appointment of Hon Alhaji Alpha Bakarr Sahid Kanu. He noted that the nominee must be the most celebrated person in the country. He commended almost all the nominees including Hon Retired Brigadier General KES Boyah, Mamusu Massaquo and others.

He recalled that, during the last Parliament, Hon Retired Brigadier General KES Boyah was very friendly and had no barrier. The nominee he said is one man that they should respect. He congratulated all including the Ambassador to Egypt and urged them all to perform. “The President has quietly and clearly identified Sierra Leoneans who are worthy of Note to man various positions” he said and urged all the nominees to do well.

Finally, he encouraged Hon Alhaji Alpha Bakarr Sahid Kanu to continue his good job and work hard to deliver on national cohesion and unity He asked him to make President Bio and Parliament proud. He also commended other nominees and asked them to surmount challenges.

In his felicitation, the Speaker of Parliament, Hon. Dr. AbassChernor Bundu advised the nominees to go and work in the interest of the state. The Speaker told the nominees that, their approval by Parliament would endorse the trust and confidence bestowed on them by the President. 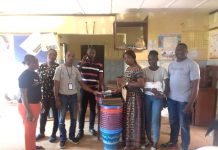