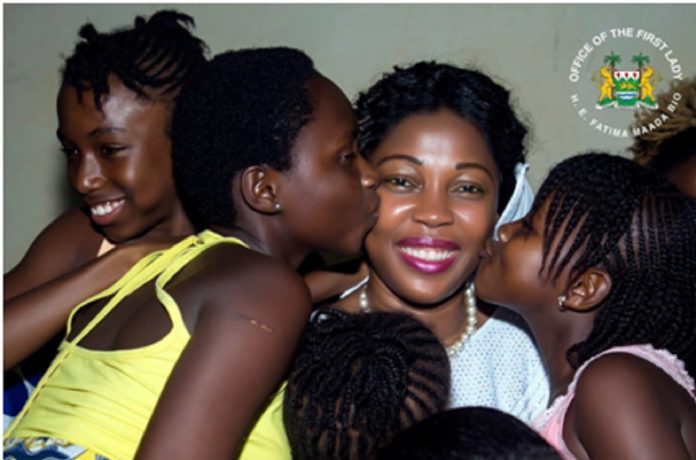 I watched a short video clip yesterday. I saw in that video the First Lady of the Republic of Sierra Leone dancing together with pupils, particularly young girls in the remotest of areas in the provinces.

Before I lurch into my piece, I want my short and short-sighted friends to know that I look at things from a lens with no political focus. I give my view from my understanding of things and the impacts those things have on the broader perspective.

This is my first piece written on the impact of the First Lady’s interface drive with young girls under the “Hands Off Our Girls” Campaign she champions.

There are many women in Sierra Leone worthy of celebration due to their impact in society. For this piece I’m calling-out Fatima Jabbe Bio for her fierce and fearless headways both in politics, governance and in the advancement of girls in the country.

No doubts, other first ladies before her have played their role in contributing to nation building. Apparently, there is a significant difference in the approach, achievements and visibility in an era dominated by men.

It has been a monumental fight for women emancipation and many hands have gone into helping to break the glass ceilings in politics in Sierra Leone.

Many who ventured and tried playing the part Fatima has perfected pulled out of the race because they were slut-shamed. They were intimidated. They were financially broke. Violence kicked them out. Their true self almost got missing because of politics. They could not live their normal life without being called out by critics telling them how to behave in public as women. Their humanity stolen by members of the public!

The First Lady visited schools in the northern region; happily captured in a video dancing to songs and moves initiated by the girls in their uniforms. I bet that’s the first time those girls had the opportunity to meet a personality of such nature.

The girls behaved like they were dancing with their mother. They were comfortable. Smiling faces demonstrating happiness. Thronging the First Lady and as always the security personnel were being protective until they were instructed by Fatima to allow the girls have access and let them enjoy the moments – a moment that will be indelible in the minds of the children and parents.

I can only imagine when they grow up and get to fully understand who they were dancing with in a manner that depicted no formality or power. She was celebrating the power and promise of young girls in the region.

Those girls are determined to finish school because they believe that their education can unlock doors for their entire family like the First Lady.

They are right—and that’s why today, we see a lot of women, women’s groups and the First Lady taking over to campaign against the abuse of women and girls and telling us about herself and shine a light on how important it is to empower girls all around the country.

Fatima Bio’s interface with young girls has remarkable impacts in their lives, not only to let them understand their rights and mitigate sexual and gender based violence against, but broaden their horizon to dream a little bigger. I’m sure if we talk to those girls now about their future and who or what they would want to be – majority would tell us that they would want to be like Fatima Bio.

What does that tell us? Where does that put us as a nation struggling to break the barriers of women and girls’ emancipation?

That tells us we are getting a determined generation of women in the future who would stop at nothing – no intimidation, slut-shame, violence or financial incapacity to achieving or reaching the heights they’ve set for themselves. Evidently, it breaks the chain of male domination in Sierra Leone and politics. It tells us gender does not make one more qualify over the other. It tells us, the men would have strong and competent contenders for space in governance, politics and other sectors that they have been polluting with their dominance.
I hope other women will take the time to learn more about these incredible young girls and support them. Every bit of support makes a difference—not just on the “Hands Off Our Girls” Campaign but all year long. This is to make sure that every girl around the country could fulfill her boundless potential. There should be no barriers, especially during this critical time. The First Lady told the girls that she truly believes that the future of our country is only as bright as our girls.